The govt issued a notification to extend till March 31 the deadline for mandatory quoting of Aadhaar and PAN for bank accounts. 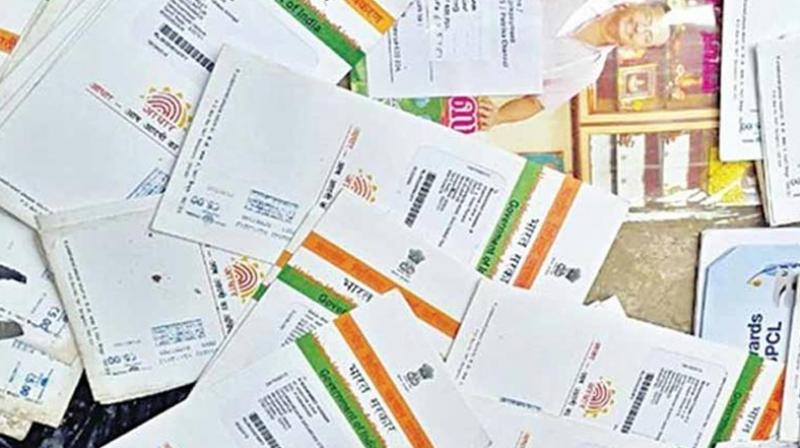 A five-judge Constitution bench headed by Chief Justice Dipak Misra said the final hearing on the petitions challenging the Aadhaar scheme itself would commence from January 17 next year. (File photo)

New Delhi: The Supreme Court on Thursday reserved its interim order for Friday on a batch of pleas seeking a stay on the government's decision of mandatory linking of Aadhaar with various welfare schemes, as the Centre extended the deadline up to March 31 next year.

A five-judge Constitution bench headed by Chief Justice Dipak Misra said the final hearing on the petitions challenging the Aadhaar scheme itself would commence from January 17 next year.

Attorney General K K Venugopal, representing the Centre, said the government was willing to extend the deadline up to March 31 next year for mandatory linking of the national biometric identifier to avail the benefit of various services and welfare measures.

Venugopal, however, told the bench, also comprising Justices AK Sikri, AM Khanwilkar, DY Chandrachud and Ashok Bhushan, that the Aadhaar should be allowed to remain mandatory for opening of new bank accounts.

The government had on Wednesday issued a notification to extend till March 31 the deadline for mandatory quoting of Aadhaar and Permanent Account Number (PAN) for bank accounts and certain financial transactions. However, there is no word on extending the February 6, 2018 deadline for linking mobile SIM cards with Aadhaar.

On the issue of linking of Aadhaar card with mobile services, the Attorney General said that the deadline of February 6 next year was fixed in pursuance of an apex court direction and the constitution bench may consider extending this deadline also.

On November 27, the apex court had said it may consider setting up a constitution bench to hear the pleas challenging the Centre's move to make Aadhaar card mandatory for availing various services and benefits of welfare schemes.

Recently, a nine-judge constitution bench of the apex court had held that Right to Privacy was a Fundamental Right under the Constitution. Several petitioners challenging the validity of Aadhaar had claimed it violated privacy rights.

The Centre had on October 25 told the top court that the deadline for mandatory linking of Aadhaar to receive benefits of government schemes has been extended till March 31, 2018 for those who do not have the 12-digit unique biometric identification number and were willing to enrol for it.

The Attorney General had told the court that no coercive action would be taken against those who do not have the Aadhaar card but are willing to enrol for. He had said such people would not be denied the benefits of social welfare schemes till March 31.

Some petitioners in the top court have termed the linking of the Unique Identification Authority of India (UIDAI) number with bank accounts and mobile numbers as "illegal and unconstitutional".

They have also objected to the CBSE's alleged move to make Aadhaar card mandatory for students appearing for examinations, a contention denied by the Centre.