The Ernakulam chief judicial magistrate court on Thursday sentenced Ameerul Islam to death for killing, raping and murdering Jisha in 2016. 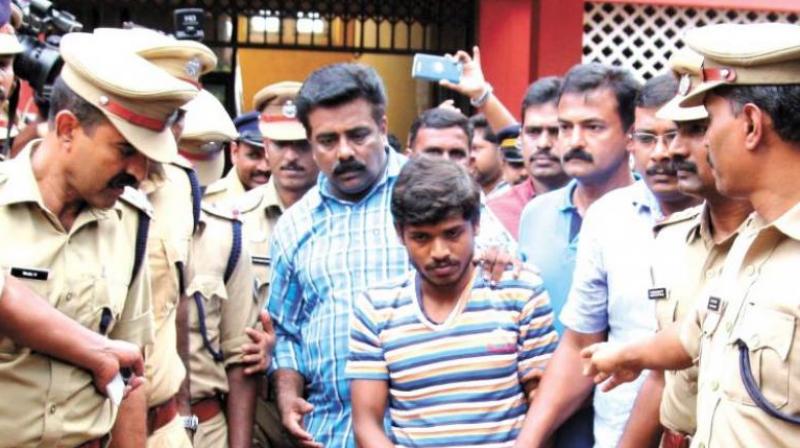 Ameerul, has been charged with rape, murder, under the Dalit Atrocities Prevention Act. (Photo: DC)

Assamese native Ameerul Islam is the lone accused in the case in which the prosecution relied on circumstantial and material evidence in the absence of direct ones.

On Wednesday, Ameerul said, "I didn't do anything. I don't know who did it."

Muhammed Ameerul Islam was found guilty under various sections of the IPC including 302 (murder), 376 (Rape) 376 (A) (causing death or causing the woman to be in persistent vegetative state while committing rape).

The accused, however, was not found guilty under 201 (causing disappearance of evidence of offence) and various sections under SC/ST (prevention of atrocities) amendment Act 2015.

In April 2016, Dalit woman Jisha was found naked in a pool of blood by her mother at their house at Vattolipadi, Iringolkkara, in Perumbavoor. The body was found battered with bruises from sharp objects with her intestines pulled out.

None of the neighbours had any clue about the murder or had not even heard her screaming.

Ameerul Islam, who according to police, entered the woman's house with the intention of raping her but killed her with a sharp object when she resisted; was arrested after 50 days from when the body was recovered.

The accused was a daily wage labourer and used to go to the worksite by the road alongside the victim’s house.

Ameerul, has been charged with rape, murder, under the Dalit Atrocities Prevention Act.

According to police, several witnesses had seen him near the victim’s house on that day. Besides the doorframe in the backyard of the house, police also recovered the DNA of the accused from the nail clip and churidar of the victim. They also found matching DNA from the slippers used by the accused.

The court trial lasted 85 days since the hearing began on April 4 this year.  The prosecution examined 100 witnesses, including 15 migrant labourers and presented 290 documents and 36 material pieces of evidence.

Finger prints of over 5,000 people were also examined by the SIT personnel who went through over 20 lakh telephonic conversations before reaching Islam.

Police have said a blood stained footwear found from a canal near the victim's house was one of the key evidence in identifying the culprit.

The Left Democratic Front (Kerala) government, after assuming power on May 25, 2016, changed the investigation team in its first cabinet meeting itself.