The PM's mother Heeraben, who is in her 90s, cast her vote in a polling booth in Gandhinagar. 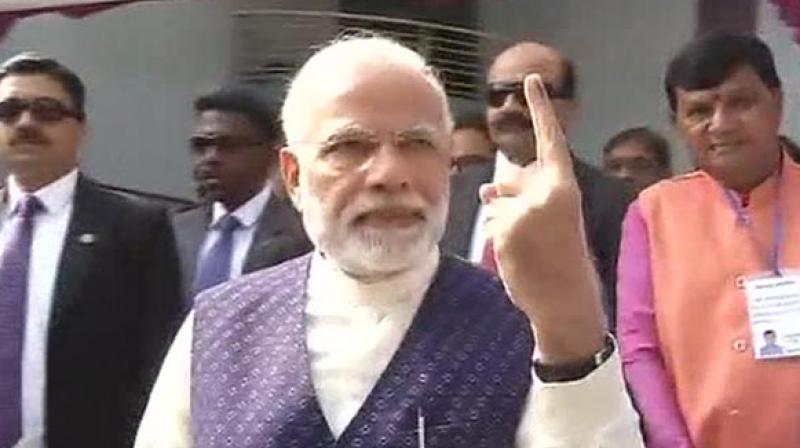 Narendra Modi stood in the queue and waited for his turn to exercise his franchise. (Photo: ANI)

Narendra Modi stood in the queue and waited for his turn to exercise his franchise.

BJP President Amit Shah was one of the early voters who exercised his franchise and cast his vote in Naranpura.

Finance Minister Arun Jaitley also cast his vote at polling booth number 961 in Ahmedabad’s Vejalpur. Jaitley stood in the queue and waited for his turn at the polling booth.

FM Arun Jaitley in queue to vote at polling booth no.961 in Ahmedabad's Vejalpur #GujaratElection2017 pic.twitter.com/PKtYjjkwbt

After casting his vote, the finance minister appealed voters to come in large numbers to exercise their franchise and keep the development in the state on.

Prime Minister Narendra Modi’s mother Heeraben, who is in her 90s, cast her vote in a polling booth in Gandhinagar.

Today is the last and the final leg of the two phase poll of 182 Gujarat Assembly. Voting is underway for 93 seats spread across 14 districts in north and central Gujarat.

68.70 per cent voter turnout was recorded till 4 pm in Thursday’s poll.

There were reports of malfunctioning of electronic voting machines (EVMs) and VVPAT (Voter Verifiable Paper Audit Trail) at some places in Aravalli and Panchmahal districts.

A total of 851 candidates are in the fray for the second phase, where 2.22 crore people are eligible to vote.

If the election is a prestige battle for Prime Minister Narendra Modi, it’s a litmus test for Congress president-elect Rahul Gandhi.

The campaign was not merely vituperative but eyebrows were raised even in the saffron camp, when the Prime Minister accused his predecessor Manmohan Singh of conspiring with Pakistan to defeat BJP.

While the Opposition described the remarks as a “desperate attempt to communalise the vote bank”, BJP fielded Finance Minister Arun Jaitley to defend the PM.

This election is going to be the toughest fight for the BJP in the last two decades.

Besides facing the wrath of traders over demonetisation and Goods and Services Tax (GST), a dent in its traditional Patidar vote bank has also rattled the BJP. What came as a surprise for the saffron party was Rahul Gandhi in his new avatar.

A changed man, Gandhi upped the ante and his rallies seemed to have evoked a major response from the electorate. He also strategised the rainbow coalition of Patidar and OBC leaders, which could possibly dent the BJP.

The first phase recorded heavy polling, particularly in Patidar dominated Saurashtra region. While a section claimed this does not bode well for the ruling BJP, others maintained that “people might be angry with Modi but they are not traitors”.

Besides Gandhi, the other thorn in the BJP’s foot was 24-year-old Patidar community leader Hardik Patel.

The BJP tried every possible trick to contain and woo this young man but eventually failed. A sex CD allegedly on Hardik also went viral and was aired by a TV channel. Patel had then remarked: “If I do not have any problem with the sex CDs, why should those watching it have any? Have fun.”

In the run-up to the polls a tug of war on the issue of Hindutva raged between the Congress and the BJP.

Gandhi’s janeu and his temple run forced BJP to come out openly and claim that it was the “original Hindu party, while others are fake”. Despite the apparent advantages, the rejuvenated Congress faces the “mighty Modi”.

Despite the chill, several people could be seen queuing up outside polling booths even before voting began at 8 am.

Voting will be on till 5pm. The counting of votes and results will be announced on December 18.