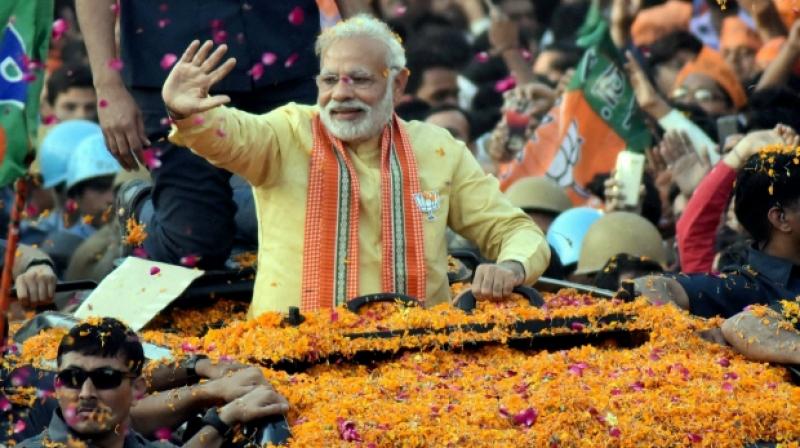 Mumbai: All the exit polls for the Assembly elections in Gujarat and Himachal Pradesh have predicted an easy victory for the Bharatiya Janata Party (BJP).

The TIMES NOW-VMR exit poll has predicted a big win for the BJP in Gujarat, where the second phase of the polls ended on Thursday, with 109 seats.

The Congress, which hoped to dethrone the BJP government in the home state of Prime Minister Narendra Modi, has been projected to win 70 seats, while the rest will win three.

The NewsX-CNX exit poll gave BJP 115 seats and the Congress 65.

India Today-Axis My India predicts BJP’s victory for the sixth consecutive time. The saffron party is projected to win 99-113 seats, while the Congress would get 68-82 seats.

The ABP News-CSDS exit poll has given 117 seats to the BJP, 64 to the Congress and 1 to others.

The Republic-C Voter has, however, given 108 seats to the BJP, like most of the exit polls. The Congress is projected to get 74 seats.

Elections to 182 Assembly seats in Gujarat were held in two phases on December 9 and 14. To form government in the state, a party has to win at least 92 seats. Exit polls show BJP is comfortably above that mark.

In Himachal Pradesh, poll analysts have predicted a sweeping victory for the BJP. The BJP will oust the ruling Congress by winning 47-55 seats, predicts India Today. Congress will get between 13 and 20 seats.

TOI Online-CVoter has also predicted BJP's victory with 41 seats. Congress is predicted to get 25 out of the 68 Assembly seats in the state.

Today’s Chanakya exit poll has predicted 55 seats for the BJP in Himachal Pradesh and 13 for Congress.

Axis My India predicted 51 seats for the BJP while Congress gets only 17.

The ABP News-CSDS has predicted the BJP to win in 38 seats and the Congress to get 29.

Where they stood in 2012: Congress defeated BJP and won an outright majority by winning 36 of the 68 seats under the leadership of Virbhadra Singh. The BJP lagged far behind with just 26 seats in its kitty whereas its breakaway faction HLP won just 1 seat.

The results for the two Assembly elections will be announced on December 18.