Storm over, Chennai fights back

Many flights were either cancelled or diverted to other destinations. 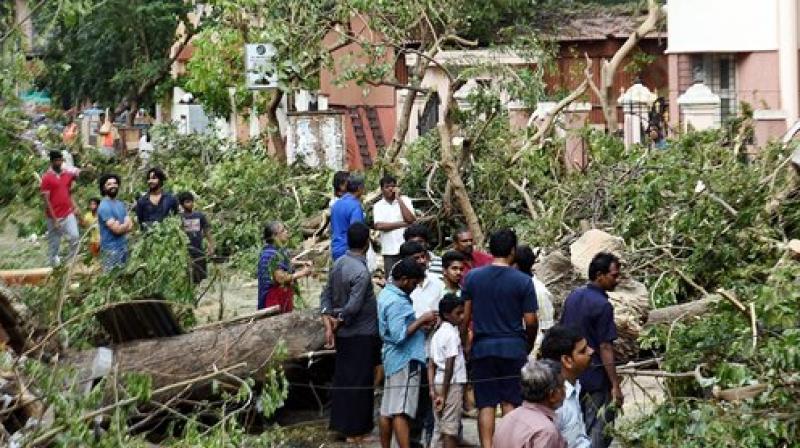 Residents looking at the uprooted trees in an area worst hit due to the Cyclone Vardah, in Chennai. (Photo: PTI)

Chennai: A day after Cyclone ‘Vardah’ ripped through Chennai, the city presented a scene of devastation with thousands of uprooted trees, broken billboards and snapped telephone and power cables besides low-lying areas reporting waterlogging.

Flight operations resumed this morning in the storm-hit city, which was limping back to normalcy. The storm, which was the most intense to have hit the Tamil Nadu capital in two decades and left four people dead, snapped communication lines, flattened homes, and threw into disarray rail, road and air traffic as it crossed the coast here on Monday.

However, with the rains having abated since morning, people came out on the streets and some of them queued up at roadside tea stalls. Office-goers were seen waiting at bus stops and railway stations with few services being operated.

Operations at the airport were suspended due to gusty winds and rainfall. Many flights were either cancelled or diverted to other destinations.

In many areas power was yet to restored as uprooted trees had fallen on power lines in the wake of the squally winds that accompanied heavy rains in many parts of the city and surroundings.