Clean the city on a war-footing: Delhi HC to civic bodies, govt

The counsel for the Delhi government and various civic bodies said they were ready for the drive, which will begin from December 16. 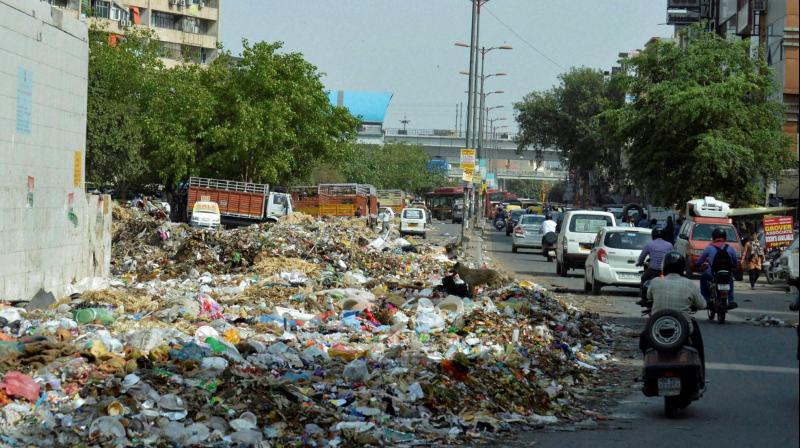 The Delhi High Court on Wednesday asked the AAP government and the municipal bodies to start cleaning up the city on a war-footing. (Photo: PTI/File)

New Delhi: The Aam Aadmi Party (AAP) government and the municipal bodies in the national capital will have to start cleaning up the city on a war-footing, the Delhi High Court on Wednesday said.

A bench of justices Badar Durrez Ahmed and Ashutosh Kumar said this after all the civic bodies failed to show to the court that they had cleared garbage from the roads, parks and pavements under their respective jurisdictions.

"You (Delhi government and the civic bodies) will have to take up the cleaning of Delhi on a war-footing. You have not even prepared yourself for a war. You were supposed to take up a drive for a period of two weeks to ensure that no malba or garbage is seen in the city of Delhi.

"This is your city. Don't you clean your house from inside. Why can't you keep your exterior (roads, parks, pavements and other adjoining areas) also clean," the bench said, adding "you cannot even keep India Gate clean, which should be the model for other parts of Delhi".

"Have you seen the lawns, roads and street lamps near the India gate. Everything is like falling apart," it said.

The counsel for the Delhi government and various civic bodies said they were ready for the drive, which will begin from December 16 and end on December 31. They also said they have earmarked Rs 75 lakh for clearing the rubble in public places.

"Good. very good. You do it and file the status reports before January 11 next year indicating clearly the extent of malba (rubble) that has been removed and the state of the roads and pavements alongwith photographs," the bench said.

The court issued the direction on a PIL by Col (Rtd) B B Sharan who has sought directions for maintaining cleanliness in Delhi.

The bench said, the drains which are within the jurisdiction of these agencies or the Delhi Jal Board, shall also be cleaned.

"The deep sewage lines which fall within the jurisdiction of the Delhi Jal Board shall be cleaned mechanically according to the provisions of law to ensure that there is a free flow of sewage through them."

"The exact number of dustbins available in all the localities of both kinds shall be indicated in the affidavit to be filed by the Municipal Corporation of Delhi before the next date of hearing.

"The directions, which are all in furtherance of the law laid down, shall be the responsibility of the heads of each of the concerned departments of the agencies and we shall hold them personally liable if directions given by this court are not complied with," the bench added.

It said the directions issued by it may pertain to a particular agency but that does not mean that the other agencies will not cooperate in carrying out the directions.

"We are reiterating that this court is very serious about the directions given and if the same is not complied, we may have to resort to strict action," the bench added.