Gandhi allegedly said that SC had accepted that 'chowkidar' (reference to PM Modi), is a 'chor' (thief). 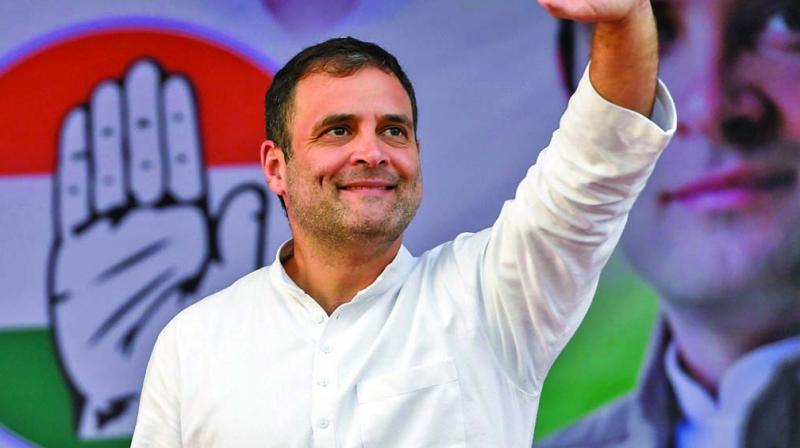 Subsequently, Gandhi tendered an unconditional apology to the top court and sought closure of the contempt proceedings against him. (Photo: File)

Terming the statement as unfortunate, a three-judge bench headed by Chief Jusice Ranajn Gogoi and Justice S K Kaul and K M Joseph said Gandhi should be more careful in the future.

The court said the remarks made by Gandhi were far from true and he should have refrained from those and could have been careful. “It is unfortunate that without any verification certain remarks were made by the contemnor (Rahul Gandhi) against the prime minister,” the bench said.

Lekhi had accused Gandhi of misquoting the April 10 order of the apex court in which it had allowed additional leaked documents to be put on record as evidence in the Rafale case.

Gandhi, who was then the president of the Congress party, allegedly said that this showed the apex court too had accepted that 'chowkidar' (a reference to Prime Minister Narendra Modi), is a 'chor' (thief).

Pursuant to this, the Supreme Court issued a contempt notice against him. Chief Justice Gogoi was categorical that Gandhi had to either offer a clear-cut apology or face criminal contempt.

Subsequently, Gandhi tendered an unconditional apology to the top court and sought closure of the contempt proceedings against him.

The bench referred to the apology and said, “Gandhi enjoys an important position in political spectrum and no court should be dragged to political discourse, whether valid or invalid.”

“Mr Gandhi needs to be more careful in future,” the bench added.

During the course of proceedings, former Attorney General Mukul Rohatgi, who represented Lekhi, had argued that Gandhi's apology should be rejected and action must be taken against him.

"He (Gandhi) has only expressed regret. The law is clear in contempt cases that the line starts with an unconditional apology," he had submitted before the court.

The court had on May 10 reserved the judgement on Lekhi's contempt plea filed against Gandhi for the ‘chowkidar chor hai’ remarks against Modi, which the top court had said were incorrectly attributed to it.

The three-page affidavit was filed by Gandhi after he had drawn flak from the apex court on April 30 over his earlier affidavit in which he had not directly admitted his mistake for incorrectly attributing the contemptuous remark to the top court. The apex court on April 15 had given a categorical clarification that in its Rafale verdict there was no occasion for it to make a mention of the contemptuous observation that “chowkidar Narendra Modi chor hain” as has been attributed to it by Gandhi.

Gandhi, in his explanation filed in the court earlier, had said that his statement was made in the “heat of political campaigning” and there was not the “slightest intention to insinuate” anything regarding the Supreme Court proceedings in any manner.

He had said that his April 10 statement was made in purely political context to counter the ‘misinformation campaign’ being led by senior BJP functionaries as well as the government that the apex court verdict of December 14 last year was a ‘clean chit’ to the Centre regarding all the aspects of the Rafale deal.