The Congress, meanwhile, has already short-listed the names 70 candidates for the first phase of Assembly elections. 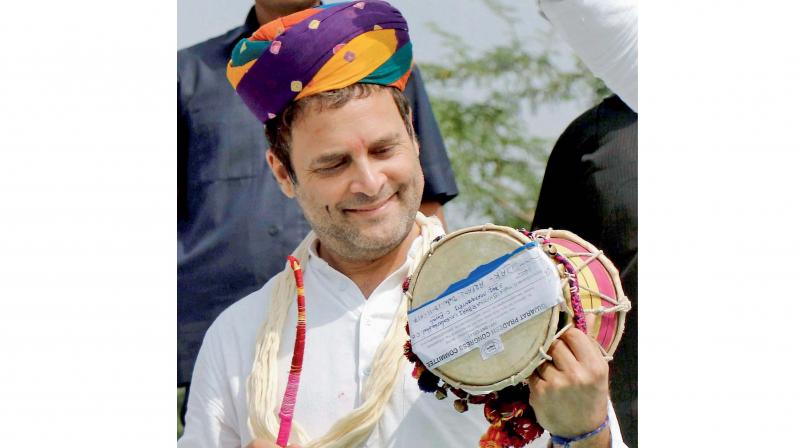 Mr Gandhi is on his fourth visit to Gujarat to participate in Navsarjan Yatra organised by the Congress. All his trips to Gujarat have included visits to temples, starting with the Dwarkadhish temple. He also visited the Swaminarayan temple and Ambaji temple, among others.

The BJP has been criticising Mr Gandhi for his visits to temples in the state and has dubbed them as “election stunt”. On Monday, BJP national secretary Bhupender Yadav, attacking the Congress leader’s recent temple visits, said, “Star campaigner of Congress Rahul Gandhi is visiting temples and offering prayers which is good as it is a part of Indian culture. However, this must come naturally to a person and not only during elections.”

In the current campaign the Congress is trying hard to shed the image of being a pro-minority party. Hence, in all the four phases of the Congress’ Navsarjan Yatra, Mr Gandhi has not just visited prominent temples of the region, but has also been seen taking an active part in aarti ritual.

He also visited the popular “garba” event in Rajkot during the Navratara period.

Keeping the pressure on Prime Minister Narendra Modi, BJP chief Amit Shah and Gujarat chief minister Vijay Rupani, the Gandhi scion hit out against all three of them. On the last day of his visit he targeted Mr Rupani over SEBI slapping a fine on his firm for alleged manipulative shares trade, and asked the Prime Minister to speak out on the issue. The Congress’ Gujarat campaign has tried to project Mr Gandhi as a “simple person” who is connected with and can relate to people at the grass roots. The entire Navsarjan Yatra showed photographs of Mr Gandhi eating meals at popular restaurants, having tea and local snacks at roadside dhabas.

The Congress, meanwhile, has already short-listed the names 70 candidates for the first phase of Assembly elections.