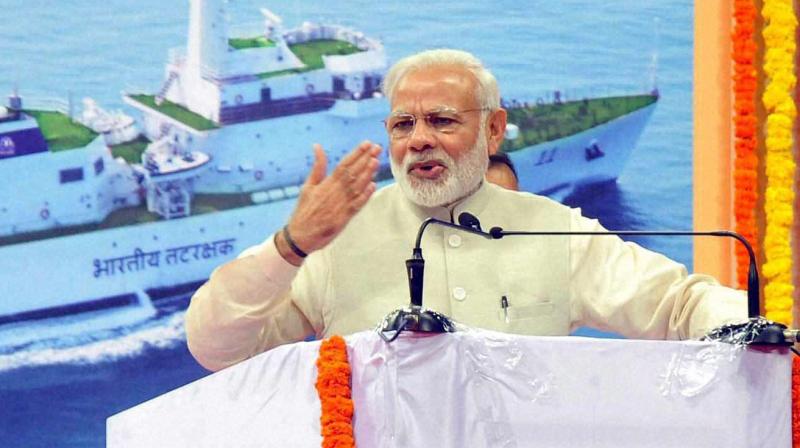 New Delhi/Panaji: In a highly emotional speech tinged with steely resolve and aggression, a teary-eyed Prime Minister Narendra Modi launched a fierce counter-offensive against the Opposition over its criticism of the demonetisation of high-value currency notes in Goa on Sunday, promising more anti-corruption measures in future and saying he would not stop even if he is “burned alive”.

While acknowledging that ordinary people were facing a lot of inconvenience over this measure, the PM appealed to them to “bear with him for 50 days”. Fighting tears, Mr Modi said he had “given up everything he had... including his home and family... for the country”, and tried to reach out to harried citizens, saying: “If you find anything wrong with my intentions or my actions, hang me in public. I promise you I will give you the India which you desired. If someone faces a problem, I also feel the pain. I understand their problem, but this is only for 50 days and after 50 days we will succeed in this cleansing.”

Declaring that the war against corruption would not end with the demonetisation exercise and that he would now target those owning benami property, Mr Modi has also convened a meeting late on Sunday evening to discuss the implementation of the demonetisation move, amid massive inconvenience being faced by people due to overcrowding at banks.

The PM’s speech moved Afghan ambassador Shaida Abdali, who tweeted: “A leader can’t be more honest to his nation than this, really admirable.”

The PM’s speech comes in the wake of a few days of chaos at banks since ATM machines did not have enough cash and could not dispense the new Rs 2,000 and Rs 500 notes anyway as they needed to be re-calibrated. This had led to severe overcrowding of people at banks amid Opposition criticism that the government was not ready for such a massive exercise.

Taking the Opposition, particularly the Congress, head on for attacking his government over demonetisation, Mr Modi said those involved in mega-scams were now standing in queues to exchange Rs 4,000. “They thought if they pull my hair, I will stop and do nothing. I will not be cowed down. I will not stop doing these things, even if you burn me alive,” he said while addressing a function in Panaji, Goa.

Making an emotional but combative speech, he said he was ready to face the consequences of his actions as some forces were “up against me” as their “70 years of loot” was in trouble as a result of the demonetisation. “I know that (some) forces are up against me, they may not let me live, they may ruin me because their loot of 70 years is in trouble, but I am prepared,” Mr Modi said. His lips trembled and there were long pauses when, fighting back tears, he said: “My dear countrymen, I gave up everything ... My home, my family. I gave up everything I had for this country.”

He said people had voted against corruption in 2014 when they elected him to lead the country. “I am doing what I was asked to do by the people of this country. This had become clear from the very first meeting of my Cabinet when I formed the SIT (on black money). We never kept the people in the dark.”

Under unrelenting Opposition attacks over demonetisation of Rs 500 and Rs 1,000 currency notes and the misery it has brought for ordinary people, Mr Modi said: “This government does not want to bother honest people, but doesn’t want to spare the dishonest. Bear with me for 50 days. Has India been looted or not? I am not going to stop at this. I will expose the history of corruption of 70 years since Independence.”

The PM declared that the war against corruption would not end with the current demonetisation exercise and he would now target those owning benami property. “This (demonetisation) is not an end. I have more projects in mind to make India corruption-free... We will take action against benami property. This is major step to eradicate corruption and black money. If any money that was looted in India has left Indian shores, it is our duty to find out about it,” he said while addressing functions in Panaji, Belagavi in Karnataka and Pune in Maharashtra.

Apparently targeting the Congress, whose vice-president Rahul Gandhi, one of the most vocal critics of the demonetisation exercise, had vented his anger against the government action after standing at a queue at a bank recently, Mr Modi said: “Those who were involved in the coal scam, 2G scam and other scams... now have to stand in queues to exchange Rs 4,000.”

“When the Congress banned 25 paise (coins), did we say anything? You could dare to stop only 25 paise, that’s what your power was limited to. But you did not make higher denomination currency notes illegal... We did it. The people have chosen a government and they expect so much from it,” he said.