Lens on cash flow from ultras in Myanmar

Security sources said these currencies were on its way and were expected to reach banks in the next few days. 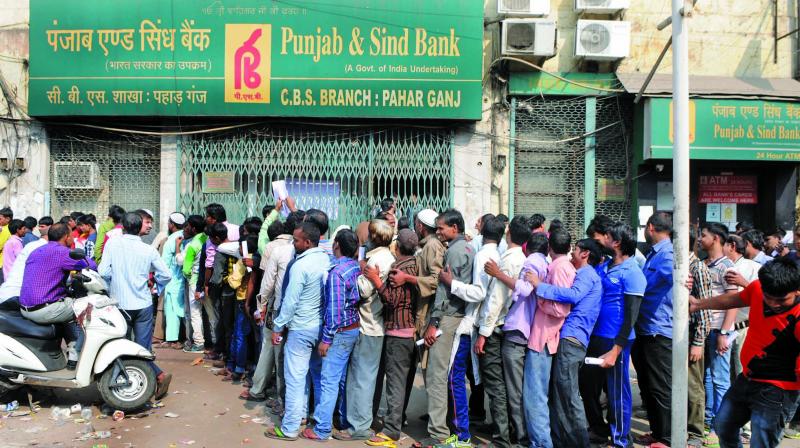 People stand outside a bank to exchange notes in Paharganj. (Photo: Biplab Banerjee)

Guwahati: The Centre’s decision to demonitise Rs 1,000 and Rs 500 notes has hit the operations of insurgent groups of north-eastern states holed up in Myanmar.

Security sources said the ministry of home affairs has alerted security agencies of large amounts of currency being transported to frontier states in the Northeast from Myanmar to be exchanged. Security agencies told this newspaper that NSCN and Ulfa(I) rebels are carrying consignments of cash to deposit them in bank accounts of their sympathisers.

Referring to intercepted communications, security sources said that the Ulfa(I) and the Khaplang faction of NSCN rebels were in touch with their sympathisers to deposit these currencies. Though sources refused to speculate the exact volume of such currency stashed in Myanmar, they said that it may be in the region of several thousand crores.

Pointing out that elaborate arrangements have been made to confiscate currency notes that are no longer legal tender, security sources said that militant groups plan to deposit these notes in the bank accounts of tribal civilians. The frontier state of Nagaland and Arunachal Pradesh, being tax-free for its tribal citizens, security sources said militants intend to take advantage of this facility.

Indicating that militants were also offering a handsome commission for exchanging currencies of higher denominations, security sources said that the ministry of home affairs has shared with respective states specific inputs that it intercepted from communication networks of militant groups.

Asserting that militants would not succeed in regularising these currencies through banks, security sources said that fear of losing money has created a visible panic among militant leaders who were monitoring the transportation of the cash from Myanmar.

Security sources said these currencies were on its way and were expected to reach banks in the next few days. The ministry of home affairs has also alerted the banks in the frontier states of Nagaland, Arunachal Pradesh and Manipur to foil such attempts by outlawed organisations.