Finance ministry said that in four days around Rs 3 lakh crores of old Rs 500 and Rs 1,000 banknotes were deposited in the banking system. 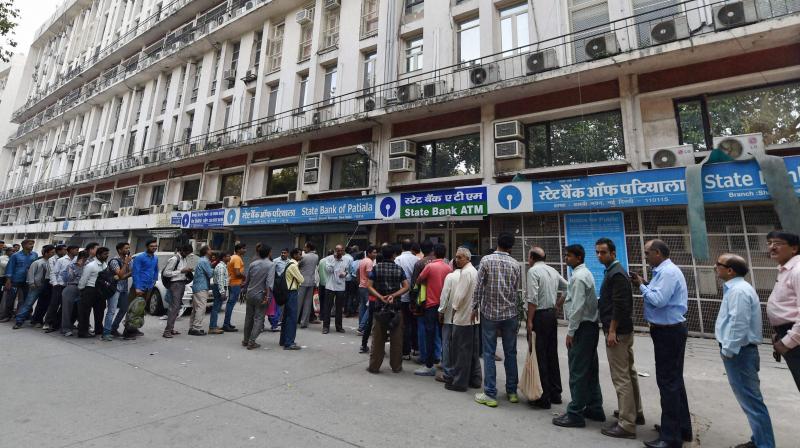 People queue up at out side of banks ATM to get money in New Delhi. (Photo: PTI)

New Delhi: The finance ministry on Sunday raised cash withdrawal limits from recalibrated ATMs from the existing Rs 2,000 to Rs 2,500 per day to deal with the cash crunch.

These measures were announced Sunday night after the ministry reviewed the availability and distribution of banknotes in different parts and regions of the country. A meeting was held amid the unprecedented rush at bank branches across the country, with people jostling to get new cash particularly due to the holiday in many parts of India on Monday for Guru Nanak Jayanti.

The last date for submission of annual life certificates for government pensioners, that has to be submitted in November every year, has been extended up to January 15, 2017.

The finance ministry said that in four days around Rs 3 lakh crores of old Rs 500 and Rs 1,000 banknotes were deposited in the banking system. About Rs 50,000 crores have been dispensed to customers by either withdrawal from their accounts or withdrawal from ATMs or by exchange at bank counters. In three or four days, the banking system has handled about 18 crore transactions.

It also said issuance of the new series of Rs 500 notes has already begun.

The finance ministry said it has been reported that certain business houses, including hospitals, caterers and tent houses, among others, were not accepting cheques, demand drafts and online payments by customers. “It is advised that in such cases customers make a complaint to the concerned district magistrates or district authorities for action against such establishments,” it said.

The ministry said all banks were told to arrange mobile banking vans to the extent possible at major hospitals to carry out emergency banking transaction for patients. Banks were advised to make arrangements for separate queues for senior citizens and disabled  persons. Separate queues will also be arranged for exchange of cash and transactions against bank accounts. Instructions had been issued to all banks and post offices to ensure the proper distribution of all denomination notes. Banks have been specially advised to ensure the availability and distribution of small denomination notes.

“The chief secretaries of the states have been requested to identify rural pockets, if any, where availability of cash has been a problem and provide all support to banks and post offices to ensure the last mile distribution of small denomination of notes is done through mobile banking vans and banking correspondents”, the ministry said.

The last date for submission of annual life certificates for government pensioners, that has to be submitted in November every year, has been extended up to January 15, 2017.