A makeover for IISc, where brilliance begets a better future 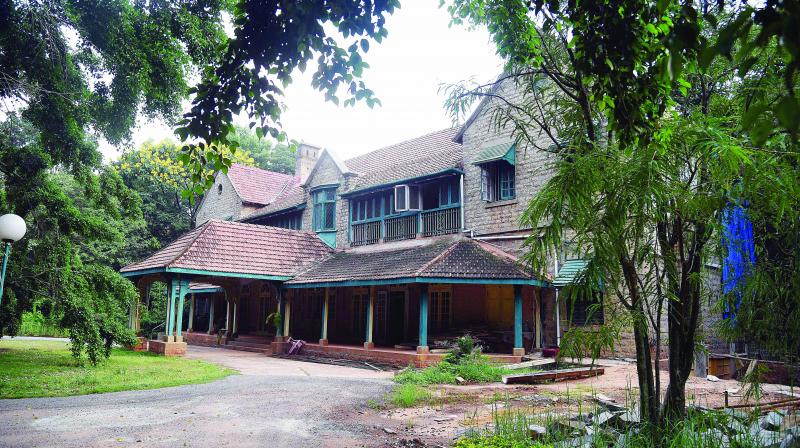 If the walls of the famed Indian Institute of Science in Bengaluru could talk, they would have many a tale to tell, of brilliant minds who beat adversity to come up with path-breaking discoveries; and of many others who fell by the wayside unsung despite putting in strenuous efforts to script their names in the annals of science. Now in its 110th year, the IISc, popularly known as the Tata Institute, was set up in 1909 with the support of Jamsetji Tata and Krishna Raja Wadiyar IV and is the dream destination for any science aficionado with an insatiable hunger to explore the hitherto unknown frontiers of science. The historic buildings, spread across 400 acres in the heart of Bengaluru, are now getting a much needed facelift with planners making sure that none of the original features, so familiar to those who have traversed through the IISc’s corridors, are lost in the process. B.R. Srikanth goes down memory lane to find out what IISc means to science lovers and Bengalureans and how it witnessed a tryst of many great minds over a century, of those would not rest in the pursuit of knowledge.

For the last resident of this mansion, life was like a scene taken straight from out of a movie.

“It was a great experience as it is a truly historic building, built more than a 100 years ago” says Prof. Padmanabhan Balaram, former Director, Indian Institute of Science (IISc), Bengaluru, about the sprawling official residence built in the middle of the wooded 400-odd acre campus.

Prof. Balaram, who moved into this 9,000-odd square feet, two-storied building from his modest apartment nearby, resided with his family for about nine years till his retirement in 2014. “My family occupied the first floor with four rooms, each of which could pass off as an independent apartment, while my father, my in-laws and some aged relatives lived in the ground floor. A large part of this residence was never used, like say the dining area, which was extremely large for a south Indian family like ours, as also some part of the first floor,” reminisces Prof. Balaram.

Uninhabited during the last five years, the Director’s residence is being refurbished along with some other heritage buildings inside the 110-year-old institute where many a legend of Indian science and engineering pursued research. The stone masonry and tiled roofs, however, will remain intact as Dr K.S. Nanjunda Rao, who headed the team which helped fix a leak in the  Durbar Hall of Mysuru Palace in 2003, and other members of the faculty, are taking pains to retain the original frontage while replacing flaking coat of plaster on the walls and high-dome ceiling as well as rewiring electrical circuits in the Director’s mansion.

“The wooden flooring on the ground floor will remain untouched, but we will replace broken tiles to make the first floor leak-proof. The garage, which was small and perhaps built for a horse-drawn carriage of the first Director, Dr Morris W Travers, who arrived in India in 1906, and commenced construction of the institute, will make way for a bigger garage,” says Dr Nanjunda Rao, Chairman of the monitoring committee of this project.

The facelift would cost about Rs one crore says Prof. Anurag Kumar, Director, IISc, adding that the mansion would be ready for his successor, likely to be appointed in July 2020. “If you walk through the campus in Cambridge or other universities, you will find that all heritage buildings are intact but are equipped modern facilities inside. We are planning to do the same here,” he told Deccan Chronicle, adding that the ground floor would include a mini conference hall to host meetings of the Governing Council, a home office for the Director, and a spacious dining area.

While most Directors played host to Nobel laureates and renowned scientists from across the world, Dr Dipankar Banerjee, former chief controller of R&D at DRDO, whose father late Dr D.K. Banerjee served as Director of IISc in early 1970s, recalled the presence of an odd-man-out in this science hub—late Sathya Sai Baba—when the late Dr S Bhagavantam (1957-62) was at the helm. “Dr Bhagavantam was an ardent devotee of Sathya Sai Baba and hosted him often as his house guest. I remember that we were invited to Dr Bhagavantam’s residence after his son was cured of an affliction by Sathya Sai Baba and the latter was blessing everyone on that occasion,” says Dr Banerjee, who later turned the tennis court (part of Director’s residence) into a cricket pitch, and played the game with Vivek Dhawan, son of Prof Satish Dhawan, who headed IISC and ISRO for several years.

Prof. Kumar says renovation of the Centre for Product Design and Manufacturing (CPDM), another building with stone masonry and tiled roofs, commenced on October 1, but like all heritage buildings, the façade would remain unaltered. This design school was set up at in 1996 with Masters degree courses in product design and engineering and doctoral programmes in design.

Interestingly, IISc began with just two departments: General and Applied Chemistry and Electro-Technology. The Departments of Organic Chemistry and Biochemistry were among the earliest to be established. The Physics department came into being in 1933, when Sir C.V. Raman became the first Indian Director of the Institute. The Institute´s departments in fields ranging from Biochemistry to Aerospace Engineering have served to nucleate research and development in both the public and private sectors. The faculty and alumni of the Institute have been responsible for establishing and spearheading many new institutions and programmes across the country, reflecting in a real sense, a major contribution of IISc to national growth and development.