An HAL statement came after the event, where the Congress president alleged that temples of modern India were being attacked and destroyed. 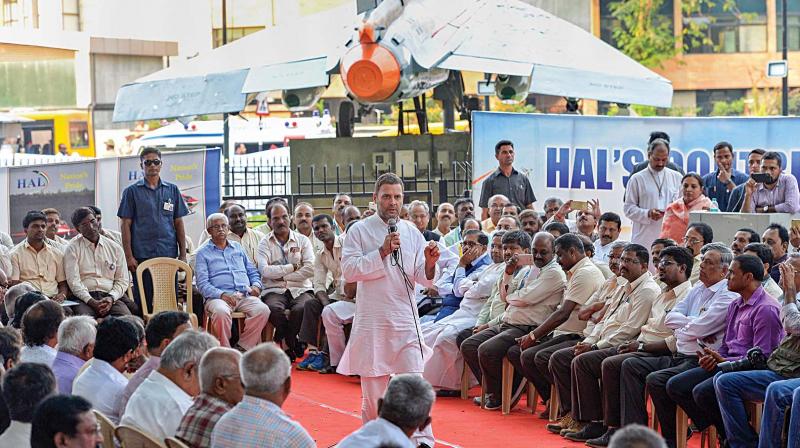 In the interaction with former and past employees, Rahul Gandhi had accused the PM Modi government of destroying the 'strategic asset' state-run aerospace company HAL and told its employees that Rafale is their right. (Photo: PTI | File)

Bengaluru: Against the backdrop of Congress President Rahul Gandhi's interaction with present and past employees of HAL on the Rafale deal on Saturday, the state-run aerospace company regretted 'politicisation' of its employees and termed it as a fad and regrettable development that would be detrimental to national security and the organisation.

An HAL statement, which did not specifically refer to Rahul Gandhi's interaction with the employees, came after the event, where the Congress president alleged that temples of modern India were being attacked and destroyed.

An official from the agency told PIT that the NDA government has extended full-fledged support (to HAL), having placed supply orders of over Rs 27,340 crore during the 2014-18 period by recognising its premier position.

Towards improvement and up gradation of infrastructure, including ramping up of production facilities, funding to the tune of Rs 7,800 crore was sanctioned during the period, it said.

The official also said HAL enjoys pride of place in the defence and aerospace industry sector and has made an immense contribution to the nation-building process.

"Today's attempt at politicisation of the employees is a fad and regrettable development and will be detrimental to the interest of the organisation, its employees as well as national security," the HAL official told PTI in the statement.

In the interaction with former and past employees, Rahul Gandhi had accused the PM Modi government of destroying the "strategic asset" state-run aerospace company HAL and told its employees that Rafale is their right.

Congress, which has been accusing the government of benefiting Reliance Defence Ltd of Anil Ambani from the deal, has also been demanding answers on why the state-run aerospace major HAL was not involved in the deal as finalised during the UPA regime.

The party had been accusing Prime Minister Narendra Modi of snatching jobs of people of Karnataka by taking away the contract from HAL.

Rahul Gandhi had been saying that had HAL been selected in place of Reliance Defence, it could have generated employment to scores of unemployed youth in the state.

However, the BJP and Reliance Defence have dismissed all the allegations as false.

PM Modi had announced the procurement of 36 Rafale fighters after holding talks with then French President Francois Hollande on April 10, 2015, in Paris.