SIT Chief BK Singh said that there was no bias in the investigation and they had questioned 200-250 people so far. 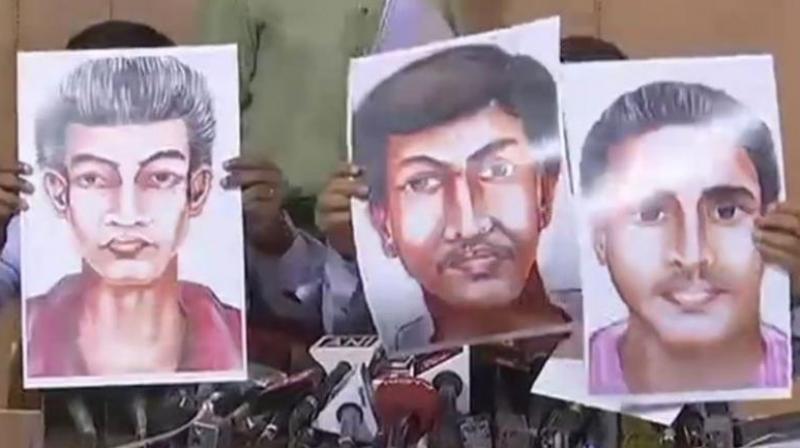 Gauri Lankesh was shot dead on September 5 on the doorstep of her house in Bengaluru. (Photo: ANI | Twitter)

Bengaluru: In a major turn of events, a Special Investigation Team (SIT) on Saturday released the sketches of two suspects who may have been involved in the killing of journalist-cum-activist Gauri Lankesh.

"Based on the infomation, we made sketches. We want people to cooperate and hence we are releasing the sketches," SIT Chief BK Singh said.

He added that there was no bias in the investigation and they had questioned 200-250 people so far.

"There are two suspects. However, two of the sketches are similar because they are made by two artists based on different eyewitness accounts," he added.

#WATCH CCTV footage of one of the suspects in #GauriLankesh case. Police say, he was conducting recce before the murder. pic.twitter.com/6jfNJjMO5e

Singh further added that they also have a video of the recce done by the suspects which they will release.

The video footage showed a man riding a motorcycle without a registration number apparently to conceal his identity.

Singh said the sketches of the suspects have been released to trace them and requested people to provide information on them if they have any.

"We cannot ascertain religion of suspects by external appearances like tilak or earrings as it would be misleading," he said.

The SIT chief said the identity of any person giving information leading to the arrest of the accused would be kept confidential.

The person would be "suitably rewarded" as has already been declared by the state government.

The 21-member SIT headed by Inspector General of Police Singh was formed a day after Lankesh was shot dead by unidentified assailants outside her house on September 5.

The SIT scrambled through footage from various private and public CCTV cameras, quizzed many people and collected details from a number of people.

Gauri Lankesh's supporters have since alleged that her killing was the result of a vendetta by right-wing groups like the Rashtriya Swayamsevak Sangh (RSS) for writing against the group in her tabloid.

Singh further said that the SIT cannot confirm if the weapons used were the same as those in the murder of rationalist MM Kalburgi.

Gauri Lankesh was shot dead on September 5 on the doorstep of her house in Bengaluru.