The hood of the car was almost submerged when bystanders noticed the woman inside, shouting for help. 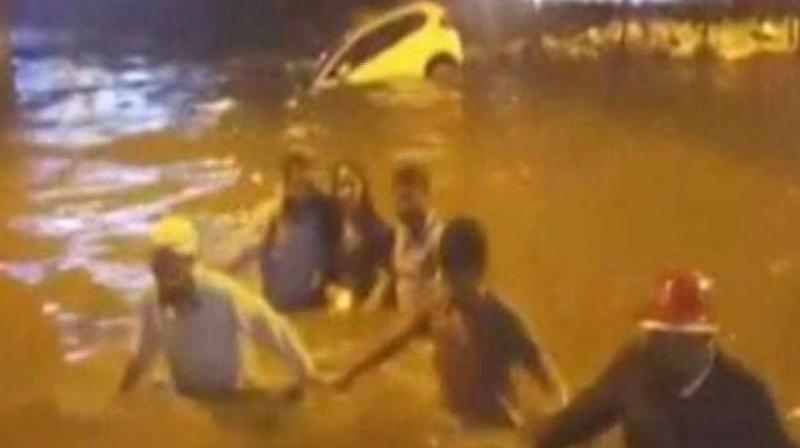 Five people jumped into the water and rescued the woman. (Photo: Screengrab)

Bengaluru: Incessant rains continue to affect normalcy in Bengaluru over the past few weeks. Heavy downpour claimed lives of six people on Friday evening while four people have died because of recurring potholes in the IT hub of the country.

In a video doing the rounds on social media, a woman who was stuck in a car on a waterlogged street can be seen being rescued by people. The stretch was so deeply waterlogged that the car, with the woman inside had started to float, leaving her with no way of escape.

The hood of the car was almost submerged when bystanders noticed the woman inside, shouting for help.

Five people jumped into the water and rescued the woman.

The incident reportedly took place near the Nayandahalli Circle on Mysuru road on Friday night.

On Friday, two of the six people died after a compound wall fell on them while the four others were washed away and are feared dead.

The rains began its spate at around 6 pm leaving the roads flooded and homes in most parts of Bengaluru Central, North and South. In some areas, residents vacated their homes and ran to upper floors to save themselves as rainwater started gushing in.

The Bruhat Bengaluru Mahanagara Palike (BBMP) announced a compensation of Rs 5 lakh to the kin of each of the deceased.