Be sensitive to plight of Rohingya Muslims, SC tells Centre

The Centre must play a big role and strike a balance between human rights and national security interests, it said. 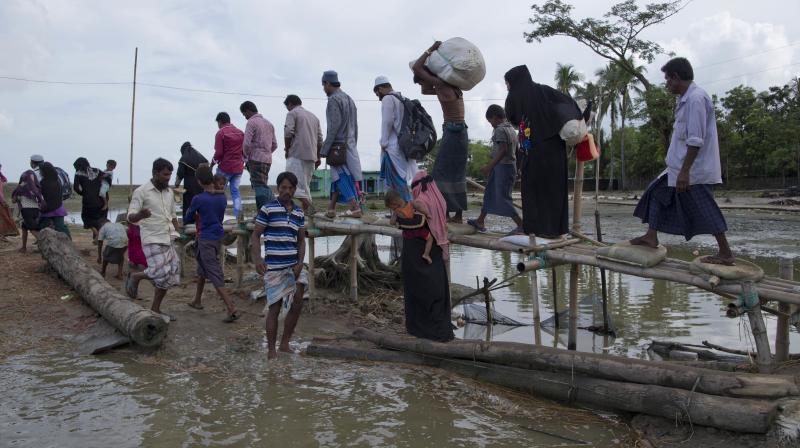 Newly arrived Rohingya Muslims from Myanmar and some Bangladeshi sympathizers walk across a makeshift bridge continuing their journey in to camp for refugees in Teknaf, Bangladesh. (Photo: AP)

New Delhi: The Supreme Court on Friday stopped short of restraining the government till next month from deporting nearly 40,000 Rohingyas who have taken refuge in the country and instead asked the Centre to be sensitive and adopt a multi-pronged approach to tackle the humanitarian issue.

The Centre must play a big role and strike a balance between human rights and national security interests, it said.

“It is a large issue. A issue of great magnitude. Therefore, the state has a big role. The role of the state in such a situation has to be multi-pronged,” said a three-judge bench, headed by Chief Justice Dipak Misra.

The CJI said, “It is a humanitarian issue. We also have to see the competing interests of national interest, economic interest, labour interest, demographic considerations and also the protection of women, children, sick and the infirm. You can take action against a terrorist, but innocents should not suffer.”

The court can’t be oblivious to the plight of innocent kids and women, the CJI added.

The bench, which also included Justices A.M. Kanwilkar and D.Y. Chandrachud, wanted to pass an order that Rohingya Muslims should not be deported till its final decision on November 21, but additional solicitor general Tushar Mehta persuaded the court not to pass such an order, as it will have wide international ramifications.

Senior counsel Fali Nariman, appearing for petitioner migrants, sought to make an urgent “mention” before the judges if any contingency of deportation arose.

When the ASG said so far the contingency had not arisen, the CJI observed, “We understand that you (Centre) may not want an order from us. But you also do not give any room for such a contingency.”

The bench reordered the submission of Mr Nariman and granted him the liberty to mention the matter, in case a need arose.

The CJI asked the government to strike a balance between human rights and national security while dealing with migrants.

Referring to the Centre’s stand that the matter was not justiciable as it was a policy matter, the CJI told the ASG that “our constitutional ethos makes us lean sympathetically towards humanitarian issue”.

“We are not going to be swayed by emotions. We will strictly go by the law. We will not permit any emotional arguments. We are treating the issue holistically and we are thinking how to strike a balance,” the court said.

Mr Nariman rejected the Centre’s stand that the issue is not justiciable and took exception to the government trying to paint all Rohingyas as terrorists and opposed any en mass deportation.

Around 40,000 Rohingyas, who fled to India after violence in Myanmar, have settled in Jammu, Hyderabad, Haryana, Uttar Pradesh, Delhi-NCR and Rajasthan.

The Union home ministry had recently directed all state governments to set up task forces to identify all illegally-staying foreign nationals.