India   All India  14 Oct 2017  A for Arms, B for Blast: Maoists rewrite the English alphabet
India, All India

A for Arms, B for Blast: Maoists rewrite the English alphabet

Children are forcibly inducted into the ranks and are brainwashed through lessons in violence, hostility.

Maoists undergiong arms training at a camp in the Bastar region.

“A for Arms, Axe B for Bomb, Blast C for Communists…”

So goes the English alphabet taught by Maoists to kid recruits — most inducted forcibly — in Chhattisgarh’s conflict zone of Bastar. The special alphabet simultaneously denies a childhood of apples, balls and cats and replaces it with a language of hostility, anger and violence.

The Maoists use these special lessons to brainwash kids and train them to take up violence at an early age. The Maoist school syllabus came to light following recovery of notes and books during raids by security forces on the Naxal camps in Bastar recently.

The Maoists run make-shift schools in their camps in jungles to impart formal education to members of Bal Sangham, child squad of CPI (Maoist), and other tribal children orphaned by the killing of their parents in encounters with security forces.

“We were shocked to learn how the tender minds are being brainwashed in the Maoist-run schools to inculcate in them the culture of violence,” a senior police officer posted in Bastar told this newspaper. Muchki Hidma, 25, a former teacher in a Maoist-run school and a member of Kistaram area committee of CPI (Maoist), was arrested in a jungle in Sukma district recently.

A police officer of Bastar, quoting Muchki, narrated how semi-literate Naxals and widows of Maoists killed in encounters have been appointed teachers in the Naxal schools. Each teacher is paid `1,500 per month by the local Jantan Sarkar, the parallel government run by Maoists in villages in the rebel strongholds, called “liberated zone” in the insurgents’ parlance.

Muchki told police that he was eight years old when he was forcibly taken away from his parents by a group of Maoists 17 years ago and drafted into the Bal Sangham. He later rose in the Maoist ranks as a member of the Kistaram area committee before his arrest. 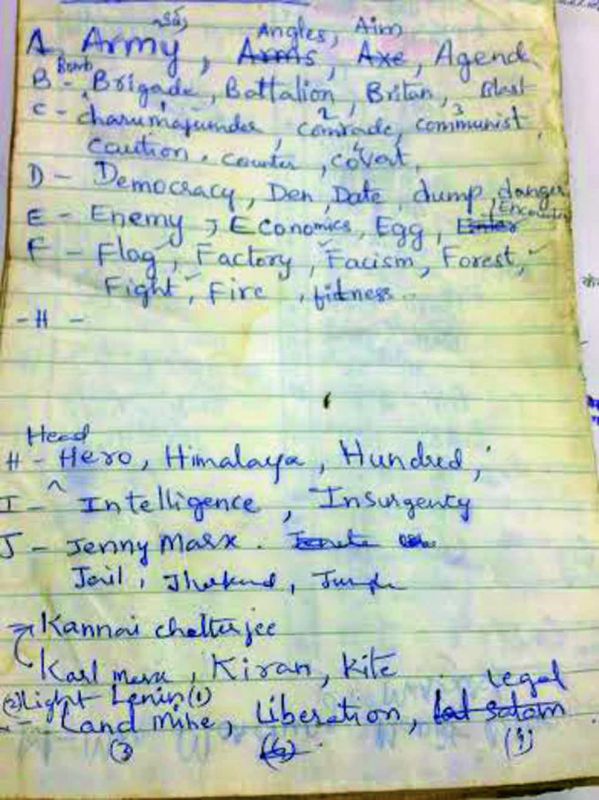 According to Muchki, around 25 tribal children, aged 6-10, were studying in his school, where two other Naxals also worked as teachers. Dr Vernika Sharma, whose post-doctoral research focuses on the  mental condition of security forces in conflict zones of Bastar, said, “The Maoists manipulate the psychology of these kids to give them the impression that wielding guns empowers them. The children feel that they don’t need to depend on others and get aggressive.”

Dr Sharma narrated her experience of visiting a couple of government schools, virtually taken over by the Maoists, where she had found students shouting slogans of “Lal Salam” during Independence and Republic Day celebrations. “This is a very dangerous situation,” she observed.

A 22-minute video clip released by the Maoist recently showed a gun-wielding Naxal snubbing children in a school in Abujmad area in south Bastar district of Narayanpur for expressing their desire to become doctors and engineers.

“You will rule the world if you become a Naxal and end up as a mere government servant if you become doctor or engineer. Power flows from the barrel of a gun not from the stethoscope (of doctor)”, the Naxal was heard telling the students.

Intelligence sources say a select group of tribal kids from Maoist schools are chosen to study in Buniyadi Communist Training School (BCTS), a specialised Maoist educational institution where they undergo a six-month course in Naxal ideology and specialised arms training.

Products of such schools are given different assignments, building urban network of Maoists, teaching in government-run schools for indoctrination of kids, besides functioning as combatants. Maoist schools sprouted in interior Bastar after Naxals destroyed government school buildings to deny security forces lodging facilities.

A press release issued sometime ago by Madhavi, the then secretary of West Bastar Division Committee of the Maoists, admitted that Naxals were running schools in the remote areas of Bastar distict.

An official account said that 109 government schools have been destroyed by the Maoists in remote areas of Bastar division, comprising seven districts of Dantewada, Sukma, Bijapur, Kanker, Narayanpur, Bastar and Kondagaon in the past 15 years.

Security forces claim they have also launched counter offensive and destroyed many Maoist-run schools that had come up in jungles. State Intelligence Bureau (SIB) sources say that Bal Sangham students are given basic education of learning the alphabet - of local languages and English – essentially to indoctrinate them with the Maoist ideology.

The United Nations, too, has commented on how the recruitment and use of children by armed groups in Chhattisgarh is a violation of human rights. Local police officials say that earlier Bal Sangham recruits were given menial work and asked to cook in Naxal camps, or were used more as informants and couriers to deliver Maoist consignments in the conflict zone.