According to reports, many of them have also complained about losing their eyesight. The first death was reported in early August. 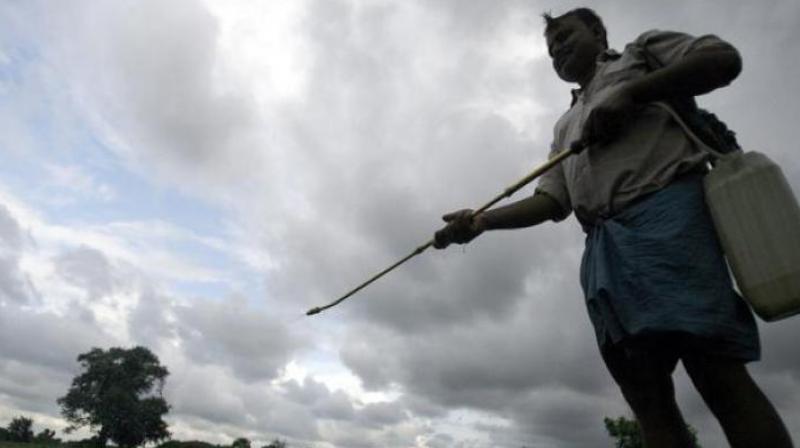 Agrarian experts are of the opinion that the new spray machines and norms of the Central Insecticide Board are responsible for the deaths. (Photo: File)

Mumbai: 36 farmers have died due to poisoning in the last one month after spraying pesticides in their cotton field in Yavatmal district of Maharshtra. Over 1,800 farmers have been affected by the inhalation of these lethal pesticides since August, according to The Hindu.

According to reports, many of them have also complained about losing their eyesight. The first death was reported in early August.

According to a report in The Indian Express, at least 800 are still in hospital, of which some have lost their eye sight while others are in the intensive care unit (ICU) in critical condition.

They were admitted in the district hospital in Yavatmal, about 670 km from Mumbai, with symptoms like blurred vision, nausea, skin rashes, headaches and dizziness.

Agrarian experts are of the opinion that the new spray machines and norms of the Central Insecticide Board are responsible for the deaths.

Chief Minister Devendra Fadnavis had last week ordered an enquiry into the matter and announced a compensation of Rs 2 lakh to the kin of each deceased farmer.

Five Krishi Seva Kendra owners were booked for selling pesticides without protective gear, according to the report.

The Maharashtra government had on Friday formed a Special Investigation Team (SIT) to look into the death of farmers from Yavatmal district.

A Government Resolution (GR) in this regard was issued. It is a seven member committee, which has presumed that the death of several farmers is a "man-made disaster", mentions the GR.

The purview of the SIT would be fixing responsibilities on state government officials, organisations involved in it, assessment of quality control department's routine reports of pesticide samples and recommendations to withdraw or ban certain types of pesticides, said the GR.

The issue of farmers suffering from exposure to pesticides began in July this year but its gravity deepened after 36 farmers lost their life, according to local activists.