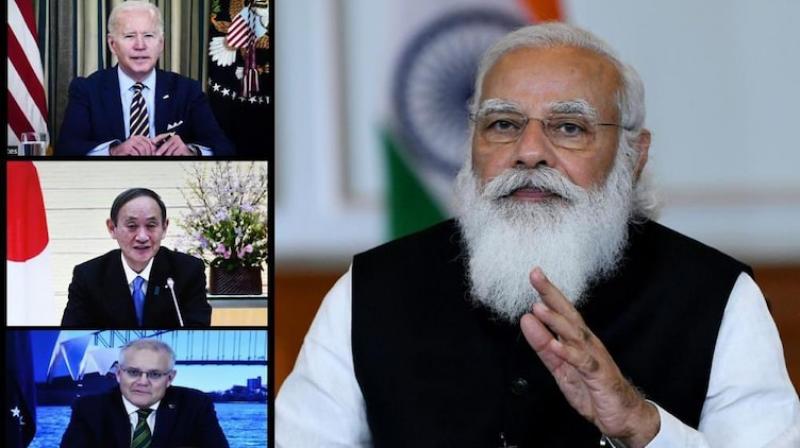 The developments in Afghanistan, the Covid-19 pandemic and ways to expand cooperation for a free, open and inclusive Indo-Pacific are set to be the central focus of the first in-person Quad summit. (Twitter)

New Delhi/New York: Prime Minister Narendra Modi will visit the United States next week to participate in the first-ever in-person four-nation Quad summit at the White House on September 24 to be hosted by US President Joe Biden, both New Delhi and Washington announced in separate statements on Tuesday morning. Thereafter, Mr Modi will travel to New York to address the UN General Assembly the next day, on September 25.

It is learnt that the developments in Afghanistan, the Covid-19 pandemic and ways to expand cooperation for a free, open and inclusive Indo-Pacific are set to be the central focus of the first in-person Quad summit. In Washington, Mr Modi is expected to hold separate bilateral talks with President Biden and Australian PM Scott Morrison. The Modi-Biden bilateral meet is likely to take place at the White House on September 23. Both leaders have spoken virtually many times after Mr Biden became the US President in January 2021.

The last time Mr Modi had visited the US was in September 2019 when he and then President Donald Trump had addressed the “Howdy Modi” event in Houston.

“Prime Minister Narendra Modi will be participating, along with Prime Minister Scott Morrison of Australia, Prime Minister Yoshihide Suga of Japan and President Joseph R. Biden of USA, in the Leaders’ Summit of the Quadrilateral Framework in Washington D.C. on September 24,” the MEA said in a statement. It added that the leaders will review the progress made since their first virtual summit on March 12 and discuss regional issues of shared interest.

The summit will no doubt be watched keenly by China whose military and economic power has become very assertive in the region. The US in a statement said the “Biden-Harris administration has made elevating the Quad a priority”. In a statement from Beijing, China on Tuesday hit out at the coming Quad summit to be hosted by President Biden, saying the formation of “cliques” targeting other countries “won’t be popular” and has “no future”.

The Washington visit will also give Mr Modi an opportunity to discuss key issues with the US President, such as the situation in Afghanistan in the wake of the US military withdrawal and the seizure of power by the Pakistan-backed Taliban there last month.

The Quad summit discussions will cover the Quad Vaccine initiative that was announced in March this year, with the leaders also expected to “exchange views on contemporary global issues such as critical and emerging technologies, connectivity and infrastructure, cyber security, maritime security, humanitarian assistance/disaster relief, climate change and education”.

In New York, the MEA said the “Prime Minister is scheduled to address the General Debate of the High-Level Segment of the 76th Session of the United Nations General Assembly on 25 September 2021. The theme for this year’s General Debate is ‘Building Resilience through hope to recover from COVID-19, rebuild sustainably, respond to the needs of the planet, respect the rights of people, and revitalise the United Nations’.”

The White House added: “The Quad leaders will focus on deepening our ties and advancing practical cooperation on areas such as combating Covid-19, addressing the climate crisis, partnering on emerging technologies and cyberspace, and promoting a free and open Indo-Pacific.”

This will be Mr Modi’s first foreign visit in nearly six months and his second since the outbreak of the Covid-19 pandemic. In March, the Prime Minister had travelled to Bangladesh to attend events organised to mark the birth centenary of Bangabandhu Sheikh Mujibur Rahman and 50 years of the war of liberation of that country.
Those familiar with the preparations for the Quad summit said that the situation in Afghanistan following the return of the Taliban to power will be deliberated extensively. Afghanistan has been grappling with rising poverty and hunger and has seen widespread violations of human rights, particularly of women, under the new dispensation, triggering massive global concerns.

India and the US have held a series of meetings as part of preparations for Mr Modi’s visit to the US. US secretary of state Antony Blinken paid a two-day visit to India in July. Before that, US defence secretary Lloyd J. Austin had paid a three-day visit to New Delhi in March.