In 2017, Tharoor's tweet, with words like "exasperating farrago of distortions", made headlines and became the buzz word of the Internet 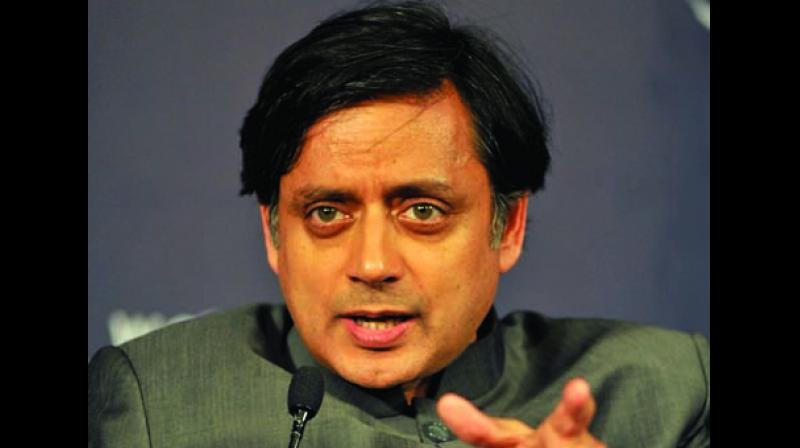 New Delhi: Senior Congress leader Shashi Tharoor, whose penchant for obscure many-syllable words is well-known, on Sunday had an odd-request from author Chetan Bhagat who asked the word wizard to praise him using "big words".

Much to the delight of Bhagat, Tharoor obliged in no time and used choicest of words — "sesquipedalian" to "limpid perspicacity" and whatnot — from his voluminous vocabulary, famously called 'Tharoorosaurus', in his tweet addressed to the author.

It all started after Tharoor, 64, took to Twitter and praised Bhagat for his article in Times of India, titled "The youth need to shut their phones and ask about the economy".

The Congress MP from Thiruvananthapuram termed Bhagat's opinion piece as "superb" and one with a "clear message".

"Superb piece by @chetan_bhagat on all that ails our country & what we should do about it. Chetan's great virtue is the simplicity and directness of his writing. His message is clear & I hope his fans in the government act on it," tweeted Tharoor, a best-selling author himself.

Taken aback by the lavish praise from Tharoor, Bhagat who said he will be framing the tweet requested the Congress leader to use "big words" to praise him.

"Ok I still can't get over this. The @ShashiTharoor has praised @chetanbhagat. I am floating. Just one request sir, next time can you use some big words to praise me, like ones that only you can do. Superb is nice but a big one would really make my day!," Bhagat tweeted.

Soon the diplomat-turned-politician replied, "Sure, @chetan_bhagat! It's clear you are not sesquipedalian nor given to rodomontade. Your ideas are unembellished with tortuous convolutions & expressed without ostentation. I appreciate the limpid perspicacity of today's column."

The entertaining Twitter exchange gave way to a flurry of memes and hilarious tweets.

"Enjoyed this @ShashiTharoor chetan_bhagat can write another book 'The 4th Mistake of My Life'," tweeted Dominic Savio.

"After so many days I needed a dictionary #shashitharoor#chetanbhagat," tweeted Mayur Shinde.

BroJack tweeted, "12 years of ICSE upbringing, just to not even be able to figure out if he's talking for or against Chetan Bhagat."

For the unversed, 'sesquipedalian' means a word being polysyllabic, 'rodomontade' is boastful, 'convolutions' means complex, 'ostentation' means being pretentious, 'limpid' is clear and 'perspicacity' is to be shrewd.

In 2017, Tharoor's tweet, with words like "exasperating farrago of distortions", made headlines and became the buzz word of the Internet.

His latest book, aptly titled "Tharoorosaurus", is a collection of 53 such words, one from every letter of the alphabet.