The banner was erected by an AIADMK's local party man, C Jayagopal for his son's wedding. 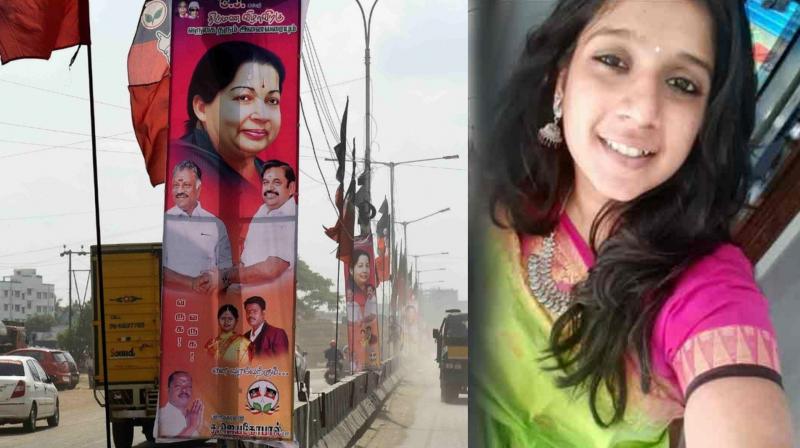 'I lost my daughter due to the banner culture. The banner collapsed on her and she fell. The tanker lorry ran over her and she ran on the spot,' he said recalling the tragic incident. (Photo: File)

Chennai: 'She was my only daughter and now we have lost her,' said Ravi, an upset father of Subhashree, the 23-year-old Chennai techie who died on Thursday. An unauthorised banner struck her down on Thursday after which a speeding lorry ran over her killing her instantly.

'She was like a tree to us and now that tree is uprooted. This should not happen to any family,' he said, The Hindu reported.

'I lost my daughter due to the banner culture. The banner collapsed on her and she fell. The tanker lorry ran over her and she ran on the spot,' he said recalling the tragic incident.

Subashree, who worked in an IT firm was on her way home on the Pallavaram -Thoraipakkam Radial Road in Pallikaranai on Thursday afternoon when the banner struck her down.

It was erected by an AIADMK's local party man, C Jayagopal for his son's wedding. On Friday, Pallikaranai police booked a case against him under the Tamil Nadu Open Places (Prevention of Disfigurement) Act of 1959.

Ravi also said that if the lorry driver had kept his speed under control, it wouldn't have cost his daughter's life.

The driver of the private tanker was produced before the court by the traffic police and he was remanded in judicial custody.

He was booked for rash and negligent driving.

Saranya, Subhashree's classmate who took the same route seconds after the accident said that she was travelling in a share auto that day.

'When I passed by the road seconds after the accident, I did not realise that Subasri was killed. Only after reaching home, I learnt from the TV about her death. I was shocked.'

After the accident, the hoardings were removed by the AIADMK cadre.