PM Modi said, the concept of 'Vasudhaiva Kutumbakam', the world is one family, gives India an identity different from all other countries. 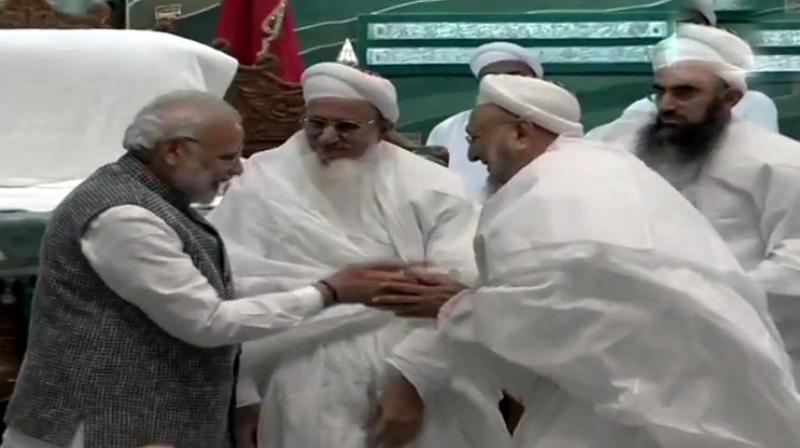 Indore: Praising the Dawoodi Bohra community for its honesty in trade, Prime Minister Narendra Modi Friday said the concept of 'Vasudhaiva Kutumbakam', the world is one family, gives India an identity different from all other countries.

The Prime Minister was speaking at a function held at the Saifee Mosque.

The community's spiritual head, Syedna Mufaddal Saifuddin, felicitated PM Modi on his arrival at the mosque for the event, 'Ashara Mubaraka', which commemorates the martyrdom of Imam Husain, the grandson of Prophet Mohammad.

"The concept of Vasudhaiva Kutumbakam is a great strength of India, making it distinct from others. The Bohra community is making the world aware of this concept through its work," the Prime Minister said in his address.

Vasudhaiva Kutumbakam, PM Modi explained, is an ancient Indian concept which envisages the world as one family. "We are proud of our past, we believe in our present and are confident of our bright future," the Prime Minister said.

Prime Minister Narendra Modi highlighted the GST (Goods and Services Tax) roll-out and other economic reforms carried out by his government and said members of the Bohra community took maximum advantage of these steps as they are known to carry out their trade and business world over with honesty.

"They have set an example for other people (with their honest trade dealings)," he said.

The Prime Minister also praised the Dawoodi Bohras, a sect within Shia Islam known for their trading and business acumen, for their efforts in making the Swachh Bharat Abhiyan a success.

"Mahatma Gandhi met the Sydena during a train journey and they became very close. During the Dandi Yatra, Gandhiji stayed in Saifee Villa (a building owned by the community in Dandi, Gujarat) which was later dedicated to the nation," the Prime Minister said.

The 'Swachhata Pakhwada' (cleanliness fortnight) will be launched on September 15 and will culminate on October 2 on the occasion of Gandhi Jayanti, he said.

The Prime Minister was received by Chouhan and others on his arrival at the Devi Ahilyabai Airport at Indore.