The Western Air Command (WAC) looks after both the crucial borders with China and Pakistan. 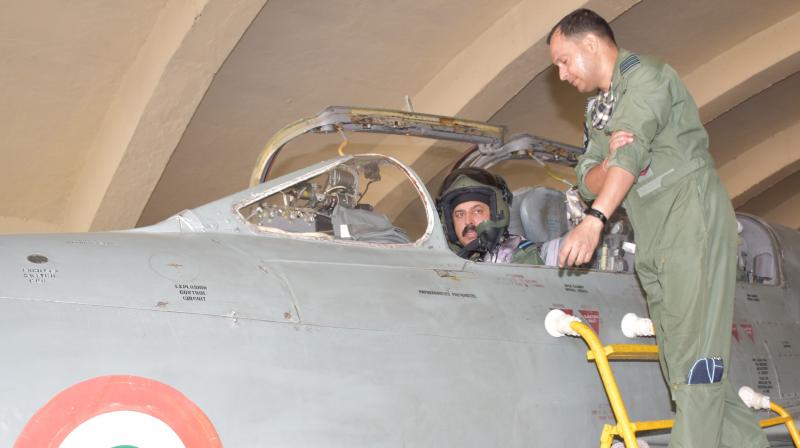 RKS Bhadauria getting ready to fly.

New Delhi: Indian Air Force (IAF) chief Air Chief Marshal RKS Bhadauria on Thursday flew fighter aircraft MiG-21 Bison at a frontline air base under Western Air Command to send a message that the air force is all prepared to take any challenge from adversaries.

The Western Air Command (WAC) looks after both the crucial borders with China and Pakistan. The Western Air Command  has over 200 bases placed under its command and has been involved in all major operations in India. Due to its geographical location, the Command has always been the hub-centre of all operational activities during any operation, including Kashmir Operations 1947-48, Sino-Indian Conflict 1962, Indo-Pak War 1965, Indo-Pak War 1971, Operation Pawan 1986 (Sri Lanka) and Operation Safed Sagar 1999 (Kargil).

Indian Air Force said on Thursday that the Air Chief Marshal was briefed by the Air Officer Commanding (AOC) of the base on the readiness and operational status of the lodger units located at the base.

Bhaduria reviewed the operational preparedness of the base and interacted with air force personnel serving on the frontlines. He urged the air force personnel to maintain the highest standards of readiness. He also appreciated their efforts in preserving IAFs combat potential during the ongoing COVID 19 pandemic.

The Indian Air Force has kept almost all its air bases under the Western Command at a “very high level of readiness” in view of the over three-month border row with China in eastern Ladakh.

Last week, IAF  Vice Chief Harjit Singh Arora had visited Daulat Beg Oldie Advanced Landing Ground (ALG) in Ladakh, where Chinese have intruded in the Depsang plains in an attempt to dominate this strategically important sector which is near Aksai Chin. During the visit Air Marshal  Arora also flew Chinook and Light Combat Helicopter in Ladakh.

IAF Apache attack helicopters and Chinooks helicopters are also active in Leh and are carrying out day and night operations. Chinook has been used to rapidly transport heavy weaponry and men to the high altitude areas along the LAC under tough weather conditions.