Valley restrictions to stay till well after Aug. 15; forces warn of violence. 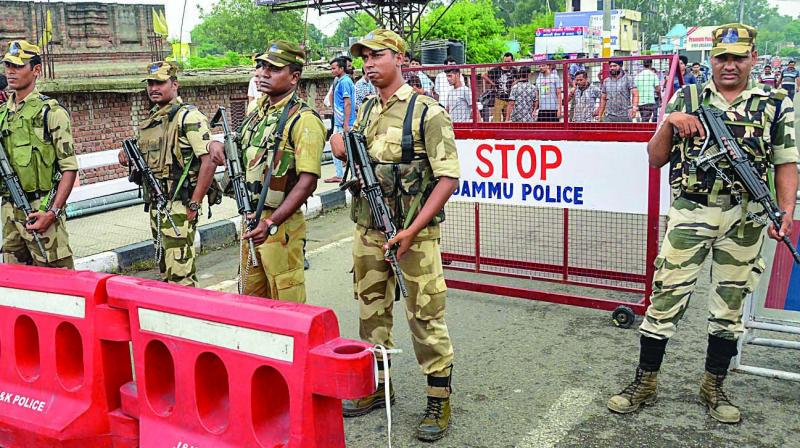 Srinagar/New Delhi: The Jammu and Kashmir government said on Tuesday that the restrictions in force in the Valley since August 5 were being eased out in a phased way. It also said the situation in the Jammu region had been “restored”.

Rohit Kansal, principal secretary to the J&K government and its spokesman, told reporters in Srinagar that the restrictions “are being eased out after a local assessment by relevant local authorities of different areas and the localities of the Kashmir division in a phased manner”.

[In New Delhi, however, senior security officials at the home ministry said the security restrictions in the Valley are not likely to be eased anytime soon and will continue till well after Independence Day, adding that several security agencies deployed in the Valley had warned the Centre that any hasty move to remove the restrictions could trigger large-scale violence and protests in the present environment.]

In Srinagar, replying to questions, Mr Kansal said the state government was conscious and sensitive to the hardships faced by the people, including the media, due to the communications blockade and security clampdown, “but whatever we do is to ensure no mischievous elements get an opportunity to create an untoward situation”. He said no report of any significant incident was reported from any part of the Kashmir Valley, Jammu or Ladakh in the past 24 hours.

Asked about the arrest of a large number of political leaders and activists and members of trade and civil society groups, he said: “Everything is being done under the appropriate laws.”

He said global investment conferences will be held in all three regions of Jammu and Kashmir, including Ladakh, and the first of these will be in the Valley in October.

on a daily basis, and it would take more time for the restrictions to be lifted. The security forces had told the Centre and the local administration that “as and when the restrictions are eased, it should be done in a gradual and phased manner”.

A senior security official said: “We have concrete information that certain elements are waiting for an opportunity to organise large-scale protests the minute the restrictions are lifted. So these need to remain in place for a few more days to avoid any major untoward incident. We are in no major hurry.”

At present, security arrangements in the Valley are being largely managed by the CRPF, with the help of the BSF and the SSB, as well as the J&K police in some areas. The Army is also being roped in some sensitive areas, particularly in South Kashmir.

Officials said while the administration is fully aware of the hardships faced by people, “if the trade-off is between inconvenience and loss of life, what should we choose?”

The security agencies are also closely monitoring the social media to check the spread of false information. The MHA and J&K has asked Twitter to suspend at least eight accounts which it claims are being operated outside J&K and indulging in “spreading rumours and misinformation to disturb the calm in the Kashmir Valley”.

Senior officials also said that leaders like Omar Abdullah and Mehbooba Mufti had been arrested as a precautionary measure, and would be released only after normality is restored in the region.

In Srinagar, speaking of the measures initiated by the government to provide essential services to people, the J&K principal secretary said medical services were being made available to them “without any hindrance”. He claimed 13,500 OPDs have been given the requisite medical treatment and 1,400 new admissions done, besides performing 600 medical procedures at various government hospitals and other medical facilities.

The spokesman said the availability of all drugs, including life-saving ones, had been ensured in every hospital across the Valley.