It may be noted that Pakistan observes its Independence Day on August 14. 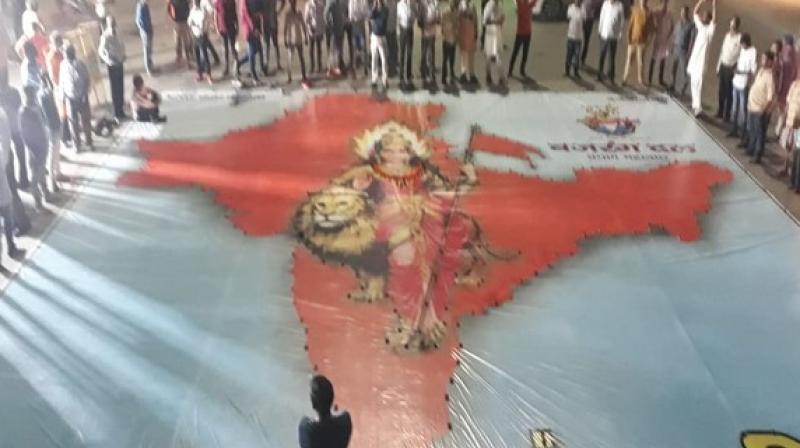 On this day, every year, the Islamic nation celebrates its freedom from the British colonial rule in 1947. The same day, the country also separated from India. (Photo: ANI)

Marking Pakistan I-Day as 'Akhand Bharat Sankalp Diwas' which loosely translates to 'pledge day for undivided India', a large number of Bajrang Dal workers gathered at a major city crossing and placed a large picture of mother India on the road.

The picture showcased map of the 'undivided India' with the geographical boundaries of the map spreading from Bangladesh in East to Afghanistan in West.

Large number of Bajrang Dal activists gathered on the occasion pledged for creating an 'undivided India' and lit up earthen lamps around the poster, while shouting slogans in the reverence of India's glory.

Some political and religious group, including Vishwa Hindu Parishad and Bajrang Dal have intensified their demand for reclamation of Pakistan-administered Kashmir under the pretence of 'akhand bharat', after the abrogation of Article 370 and 35A of the Indian constitution

It may be noted that Pakistan observes its Independence Day on August 14. On this day, every year, the Islamic nation celebrates its freedom from the British colonial rule in 1947. The same day, the country also separated from India.

Earlier this month, Rashtriya Swayamsevak Sangh (RSS) had announced that its affiliate- Muslim Rashtriya Manch (MRM) along with 50 other associated organisations have decided to organise seminars and take out marches for creating awareness amongst the masses regarding PoK and Aksai Chin being an integral part of the country.