People insisted that the man would put the stick in front of children who immediately fell unconscious. 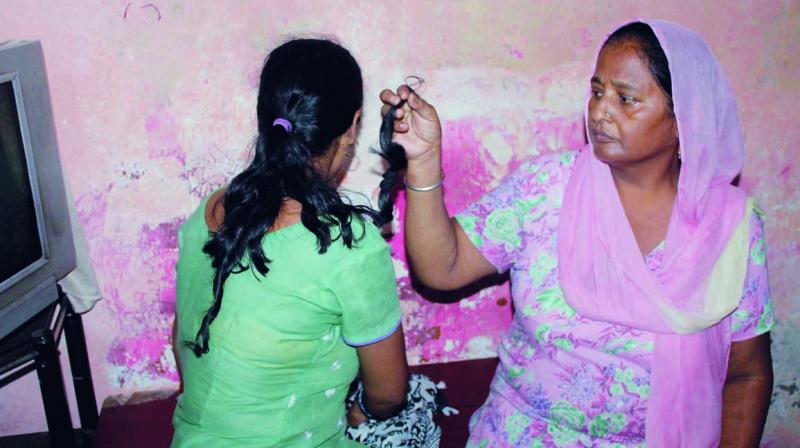 A woman shows chopped braids of a relative. (Photo: PTI)

Lucknow: Braid-cutting is just the latest of mass hysterias to have hit Uttar Pradesh. Psychiatrists insist that phobia comes out of a sense of insecurity and affects the less-educated people more and it is just a matter of time before this new scare dies down. In the mid-Eighties, there was panic in the state over rumors of a man with a wooden stick out to kidnap kids. People insisted that the man would put the stick in front of children who immediately fell unconscious.

He would then put them in a sack and disappear. The man came to be known as “Lakadsunghwa” (one who smells the wood) and over three dozen children disappeared during this phase that lasted almost two months.

Anxious parents stopped sending children to school, did not allow them to play outside and even locked them up inside the house during night. Police insisted that “Lakadsunghwa” was actually a child lifter but no one was ever caught. The hysteria faded away gradually and the “Lakadsunghwa” disappeared as mysteriously as he had appeared.

Police investigations were closed and, till date, nothing is known about the children who disappeared. Ram Jeevan, a farmer in Ballia whose three-year-old nephew went missing during this period, says, “I continue to pray for the well being of my nephew. ”

Roti-Pyaz wali Budhiya
In the late Nineties, the ‘Roti-Pyaz wali Budhiya’ made headlines. People living in slum areas insisted that an old woman came to their homes, asking for roti-pyaz (chappati and onion) and those who gave it to her, later found all their money missing from the house. The scare lasted for about a month and several women beggars were beaten up on grounds of suspicion.

Muhnochwa
In 2002, the state was in for another scare — this time it was the “Muhnochwa” (face scratcher). Villagers insisted that a light-emitting flying object came towards them in the dead of the night and scratched their face, even gave them mild electric shocks.
The “Muhnochwa” was reportedly seen in about 30 districts including Ballia, Ghazipur, Mau, Chandauli, Varanasi, Allahabad, Mirzapur, Sultanpur, Pratapgarh, Hardoi and Sitapur, and the number of victims, who suffered serious scratches and bruises on the face and arms, was in hundreds. 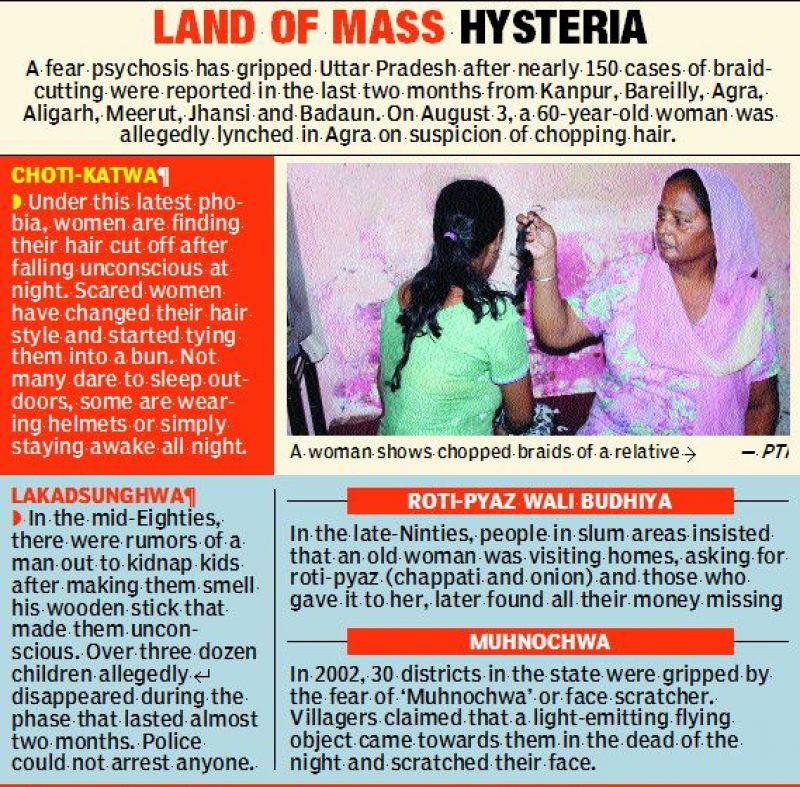 So great was the fear of the “Muhnochwa” that a villager shot dead his dog who was licking his face while he was asleep. Another beat up his father in the dark, mistaking him to be the mysterious face scratcher. At least four people jumped off the roof and died after “seeing” the “Muhnochwa” approach them. Villagers started night patrolling but the attacks continued.

When the scare reached the outskirts of Lucknow, police began investigations and found objects like a gas balloon with a battery operated light, an insect and a rubber kite at places from where the attacks were being reported.

The state government even asked experts from IIT Kanpur to probe and see whether the attacks were being made by a remote-controlled device but the team could not reach any conclusion.

Choti-Katwa
The latest braid-cutting incidents, referred to as “Choti-katwa”, are once again generating fear among women who find their hair cut off mysteriously. Somehow, all victims have complained of falling unconscious after the incident and some have even been hospitalised.

According to reports, over 150 women, most of them in western UP, have found their braids cut off.  Scared women have now changed their hair style and started tying their hair into a bun. Not many dare to sleep outdoors, some are wearing helmets or simply  staying awake all night.

Psychiatrist Prof S.C. Tiwari insists that these are cases of mass hysteria and auto-suggestions. “This phobia comes out of a sense of insecurity and affects the less-educated people more. In all these scares, the victims have belonged to low income groups”. Another psychiatrist, Dr Anand Kumar, said that some unscrupulous elements make hay by fuelling such rumours and the police should tackle the situation in the beginning instead of allowing it to spiral out of hand.