The security forces have launched “Operation All-out” against militants across the Kashmir Valley. 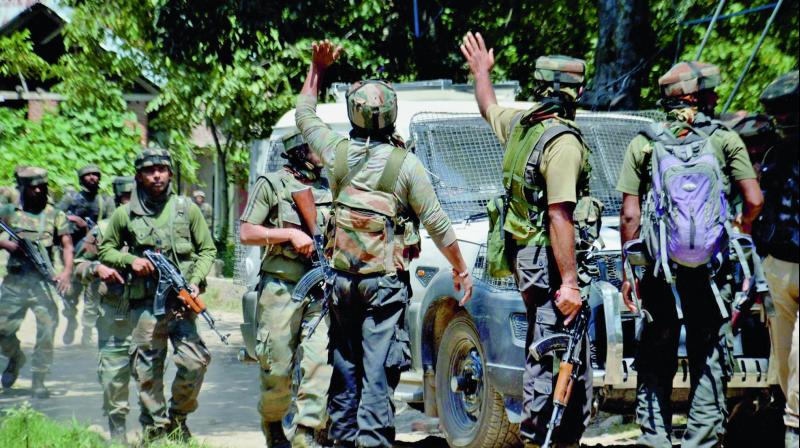 Army soldiers in action during an encounter outside a house where militants were hiding in Shopian district of south Kashmir. (Photo: PTI)

Srinagar: In a major jolt to Hizbul Mujahideen, three of its militants, including self-styled chief operations commander Yasin Itoo alias “Gaznavi”, as well as two Army jawans were killed in a fierce gunbattle in a remote village of southern Shopian district of Jammu and Kashmir overnight, officials said here Sunday. Four Army jawans were injured in the clash.

In a separate incident reported from Hajin area, two J&K policemen and an Army jawan were injured in militant firing on Sunday.

The security forces have launched “Operation All-out” against militants across the Kashmir Valley and, so far, this year as many as 136 militants, including six commanders, have been “neutralised”. However, two dozen security personnel too have laid down their lives fighting militancy.

J&K director-general of police Shesh Paul Vaid has said there will be no let-up in the tough campaign and reiterated that those who have taken up the gun are now left with only two options — either return to their homes or get killed in the counter-insurgency operations.

The officials said the J&K police’s counter-insurgency Special Operations Group (SOG) with the Army’s 3 Rashtriya Rifles and the 177 Battalion of the CRPF launched a cordon-and-search operation at Awneera village of Zainapora area of Shopian, 55 km south of here, on Saturday night on “specific information” about the presence of militants. It said: “During the search operation, militants hiding in the area fired on the joint search party. The fire was retaliated, triggering an encounter.”

The militants killed in the clash were identified as Muhammad Yasin Itoo alias “Gaznavi”, Irfan-ul-Haq and Umar Majeed Mir, all belonging to Hizbul Mujahideen. The police said the trio was involved in a number of militancy-related and anti-national activities. Gaznavi was one of the longest-surviving militants and was seen as the Hizb’s top commander in south Kashmir, police sources said.

Two soldiers who laid down their lives are Sepoy Gawai Sumedh Waman and Sepoy Ilayaraja P, both 25. The former was a resident of village Lonagra in Akola, Maharashtra, and is survived by his parents, a brother and a sister, and the latter that of village Kandani of Sivagangai district in Tamil Nadu, and is survived by his parents, wife and sister, defence spokesman Col. Rajesh Kalia said.

Meanwhile, two J&K policemen, Mukhtar Ahmed and Muhammad Ashraf, and an Army jawan, Raj Kumar, were injured as militants fired at a joint search party when it entered Wahab, Parray Mohalla, in the Hajin area of northern Bandipore district on Sunday, officials said.