Prime Minister Narendra Modi spoke to Chief Ministers of Bihar and Assam to take stock of flood situation in both the states. 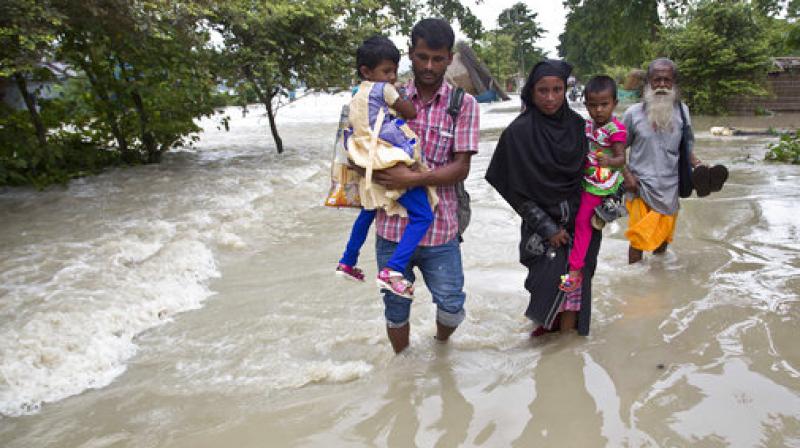 New Delhi: With the flood situation turning worrisome in Assam and Bihar, Prime Minister Narendra Modi on Monday spoke to Bihar Chief Minister Nitish Kumar over the situation in the state and assured him of all support from the Centre to mitigate the situation.

The situation is being monitored closely, Modi said.

"My thoughts are with all those affected by floods in parts of Bihar," the PM said.

My thoughts are with all those affected by floods in parts of Bihar. The situation is being monitored closely: PM @narendramodi

"Centre assures all support to Bihar government to mitigate the flood situation. Teams of @NDRFHQ are in Bihar for rescue and relief work," the PMO tweeted.

Centre assures all support to Bihar government to mitigate the flood situation. Teams of @NDRFHQ are in Bihar for rescue and relief work: PM

The chief minister had demanded an additional deployment of 10 companies of the National Disaster Response Force (NDRF) in the state, besides deployment of the Indian Air Force's helicopters to carry out relief-and-rescue operations.

Due to rains in the catchment areas of Nepal and Seemanchal district, rivers like Mahananda and Kankai in Bihar have swelled leading to floods in four districts.

Modi also said all possible support is being provided to Assam for overcoming the flood situation prevailing in parts of the state.

"Ever since Assam has witnessed flooding, the Central Government has been closely and constantly monitoring the situation," the PMO tweeted.

Ever since Assam has witnessed flooding, the Central Government has been closely & constantly monitoring the situation: PM @narendramodi

The PM also spoke to Assam Chief Minister Sarbanand Sonwal on Sunday and Monday regarding the flood situation in the state.

The flood situation in Assam has deteriorated in Assam, with at least 99 people dying and 22.5 lakh being affected in 21 districts, according to officials.

The Army has been called out for rescue operations in the state.

Assam Chief Minister on Sunday informed the Prime Minister about the devastation caused by the flood in middle and upper Assam and the disruption to vehicular movement on National Highway 37, the lifeline between the two areas, a state government spokesman had said.

Principal Secretary to the Prime Minister Nripendra Mishra has asked Assam Chief Secretary VK Pipersenia to submit a report detailing the damage and devastation caused by the current wave of floods in the state.