Rescue operations were suspended late evening as there were apprehensions of more landslides. 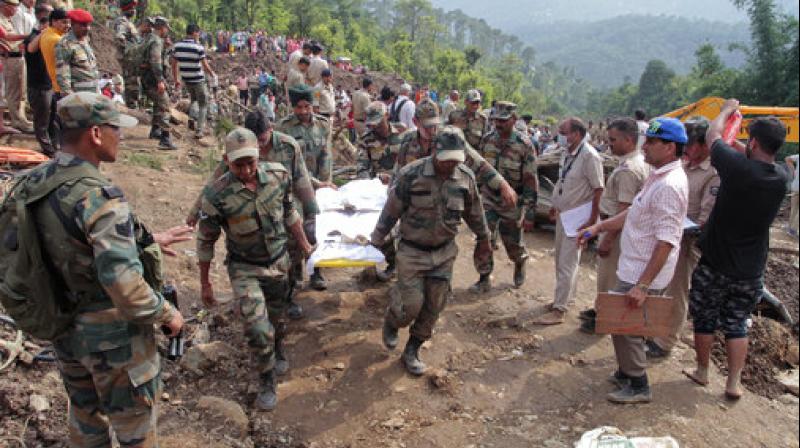 Army soldiers and rescue workers recover bodies of landslide victims even as they try to pull out two buses that were covered in mud after a landslide triggered by heavy monsoon rain in Urla village, Himachal Pradesh. (Photo: AP)

Shimla: At least 46 people died when two Himachal roadway buses were hit by a massive landslide, which was triggered by a cloudburst, on the Mandi-Pathankot National Highway on Saturday night.

Mandi Deputy Commissioner Sandeep Kadam said, on Sunday evening, that 46 bodies were recovered so far and rescue operations were underway at the accident site.

Two search and rescue teams of the National Disaster Response Force (NDRF) are operational in Mandi. The Army and Himachal Pradesh Police are also engaged in the rescue operations.

Prime Minister Narendra Modi on Sunday condoled on twitter the deaths in the landslide and prayed for the speedy recovery of the injured.

Pained by the loss of lives due to landslide related accidents in HP’s Mandi district. My condolences with the families of the deceased: PM

I pray for the quick recovery of those injured in Mandi district, Himachal Pradesh: PM @narendramodi

Chief Minister Virbhadra Singh visited the site of the accident earlier on Sunday and announced an ex-gratia of Rs 5 lakh each for next of kin of the deceased.

One of the buses was going from Manali to Katra and another from Manali to Chamba when the accident happened. The buses had halted for a tea break at Kotrupi in the night when the tragedy struck, said special secretary (Disaster) DD Sharma.

The landslide swept away the road and the buses for almost 800 metres down into a gorge and there was no trace of one of the buses which was completely buried under the debris so far.

Authorities have been directed to arrange for on the spot postmortem, he added.