Narendra Modi on Monday spoke to Assam Chief Minister Sarbananda Sonowal regarding the incessant rains that have flooded the state. 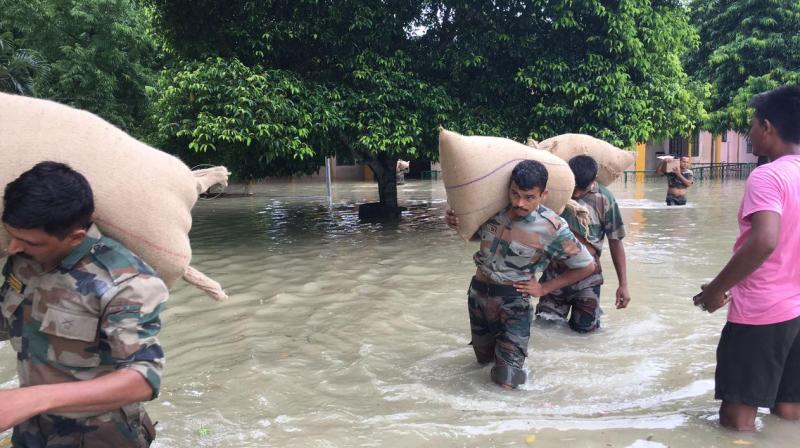 The Army has already been pressed into relief and rescue operations in different districts of Assam. (Photo: DC/Manoj Anand)

The flood situation is likely to worsen further with the Met department forecasting heavy to very heavy rains in neighbouring West Bengal, Meghalaya and parts of Assam till Wednesday.

The Northeast Frontier Railway (NFR) was compelled to cancel 20 long-distance trains, including the Dibrugarh-New Delhi Rajdhani Express. The NFR headquarters in Guwahati said that two other trains - the Dibrugarh-Chandigarh Express and Guwahati-Okha Express - scheduled to depart on Monday have also been cancelled. As many as 14 up and down trains have been stranded at different locations.

The Army has already been pressed into relief and rescue operations in different districts.

Prime Minister Narendra Modi on Monday again spoke to Assam Chief Minister Sarbananda Sonowal regarding the incessant rains that have flooded the state.

Prime Minister in his tweet said, “Central Government has been closely and constantly monitoring the situation and that all possible support is being provided to Assam for overcoming the flood situation prevailing in parts of the state.”

It is significant that more than 22 lakh people have been affected in the second wave of flood, which has inundated a vast area of 21 districts since Friday.

More than 1.83 lakh people have been displaced and have taken shelter in 439 camps set up by the government. Six people have been reported dead in Kokrajhar, three in Bongaigaon and one in Biswanath district.

Assam State Disaster Management Authority said, "With ten more deaths on Sunday, the overall death toll in this year's flood-related incidents has gone up to 99.”

Defence PRO Lt Col S Newton said, “Red Horns Division, under the aegis of the Gajraj Corps, has moved swiftly to the aid of people of lower Assam affected by floods amidst a heavy deluge and pouring waters of overflowing rivers. About 3,000 people trapped in their villages were rescued amidst fast currents and taken to relief camps. The Army deployed its boats to reach the marooned people and made a number of trips against the swift current to save people.” He said that Army was also ready to rush their soldiers for any emergency situation.