Free booster shots for adults at government hospitals from Friday

The cumulative Covid-19 vaccination coverage in the country has gone over 199.12 crore 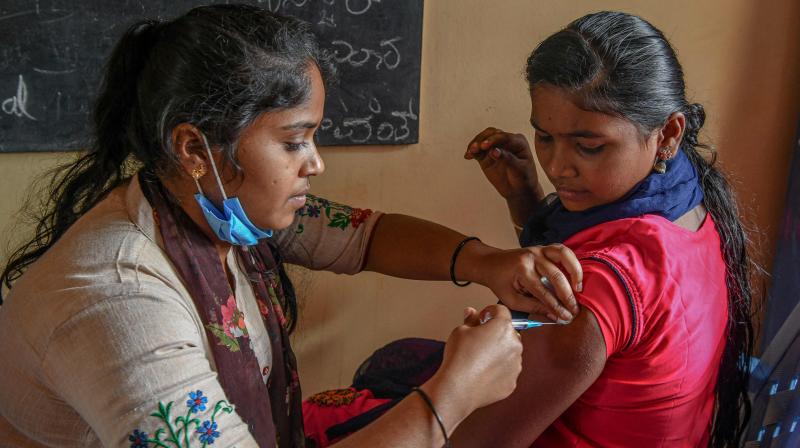 As of now, the booster dose is available free of cost to only healthcare workers, frontline workers and all elderly population above 60 years of age at government vaccination centres. (AFP)

NEW DELHI: In a major move to expand the coverage of booster dose for Covid-19, the Central government on Wednesday announced that precautionary jab will now be made available free of cost for all individuals above 18 years of age at all government vaccination centres. This will come into force from July 15 onwards for 75 days.

Union health minister Mansukh Mandaviya  said the decision will further strengthen the country’s fight against Covid-19 and urged all eligible citizens to get their precaution dose at the earliest.

The minister said that free booster dose drive is being held for the next 75 days as part of the government`s Azadi Ka Amrit Mahotsav to celebrate the 75th anniversary of India`s Independence and to boost the uptake of Covid-19 precaution doses.

In a tweet, he said : “Under the Amrit Mahotsav of Azadi, a 75-day free vaccination campaign will be conducted from July 15, in which all citizens above the age of 18 years will be given free vaccination doses at government centres.”

As of now, the booster dose is available free of cost to only healthcare workers, frontline workers and all elderly population above 60 years of age at government vaccination centres.

The government is said to be concerned about the low utilization of Covid-19 booster doses, with only seven per cent of 18-60-year-old and 40 per cent  of over-60s given the jab so far. As many as 5,10,96,109 booster doses have so far been administered against a target population of about 950 million eligible individuals.

The cumulative Covid-19 vaccination coverage in the country has gone over 199.12 crore. Last week, the health ministry had even reduced the Covid-19 vaccine booster dose gap from nine months to six months. The decision was taken after the National Technical Advisory Group of Immunisation had recommended to revise the duration between the second dose and the precaution dose from nine to six months.

India, meanwhile, logged 16,906 fresh Covid-19 cases and 45 related fatalities -- 17 from Kerala, 13 from Maharashtra, five from West Bengal, two from Gujarat and one each from Bihar, Chhattisgarh, Delhi, Jharkhand, Karnataka, Odisha, Punjab and Uttar Pradesh – in the last 24 hours.

The active cases, which have increased to 1,32,457, comprise 0.30 per cent of the total infections. The national Covid-19 recovery rate has been recorded at 98.49 per cent.

The country’s daily positivity rate stands at 3.68 per cent and the weekly positivity rate at 4.26 per cent. The number of people who have recuperated from the disease has gone up to 4,30,11,874, while the case fatality rate has been recorded at 1.20 per cent.

In Manipur, the state government has ordered closure of all schools till next week due to the recent surge in coronavirus cases. In an official order, Schools Education Commissioner H Gyan Prakash said the test positivity ratio was over 15 per cent in the state. The order stated that all schools -- government, state-aided, private schools affiliated to other boards -- will be closed with immediate effect till July 24 in public interest. Many schools in the state were scheduled to reopen after the summer vacation on July 16.

Manipur chief minister N Biren Singh had said earlier that the government would discuss the safety of the health for the children below 12 years as there was no effective Covid-19 vaccine for them in the prevailing  situation in Manipur.