The India Meteorological Department has issued a red alert, predicting heavy rains till Thursday in Saurashtra and south Gujarat districts 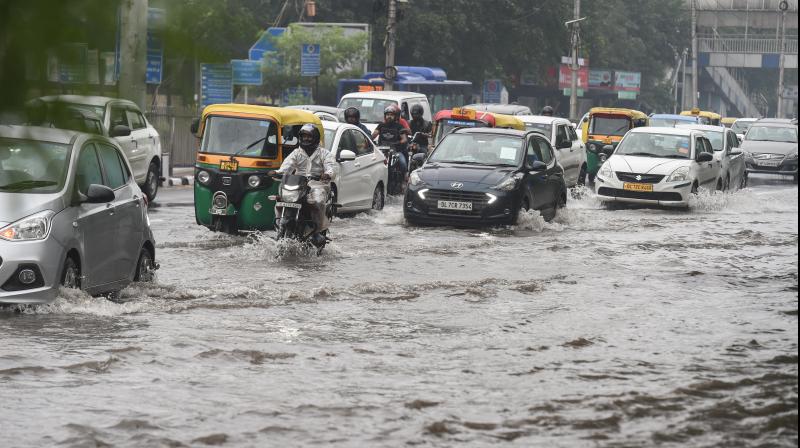 The Maharashtra capital was lashed by incessant showers leading to flooding in many low-lying areas and traffic snarls. (PTI file image)

New Delhi: Incessant showers caused landslides and floods in various parts of the country leaving at least 17 people dead on Wednesday while thousands more were forced to move to safety as rivers swelled and water reservoirs filled up fast.

The Telangana government has announced education institutes in the state will remain closed till Saturday because of continuous rain that inundated low-lying areas and damaged road links in several places.

Also, in Maharashtra's Palghar, Pune city and the neighbouring Pimpri Chinchwad area schools and colleges will remain shut on Thursday due to a heavy rain forecast.

Rains, however, continued to elude Delhi as the city has so far recorded 148.2 mm of rainfall against a normal of 149.7 mm since June 1. Despite light rains in the morning, high humidity, oscillating between 68 per cent and 95 per cent, caused discomfiture during the day.

In the west, heavy showers in parts of south Gujarat and Kutch-Saurashtra regions since Tuesday left 14 people dead, while over 31,000 were evacuated so far this season.

Heavy rains have also led to a rise in the water levels of various reservoirs in the state, with 30 of them being filled up to 70 per cent or more out of their total storage capacity.

Rains have wreaked havoc in Maharashtra, causing a landslide in the Palghar district that killed a man and his daughter while four people were swept away in overflowing streams in the Gondia district.

Both Palghar and Gondia districts have been witnessing very heavy rains since Tuesday night that inundated low-lying areas. Following the landslide in Palghar, at least 40 families in the neighbourhood of Waghralpada have been shifted to safety.

In the Chandrapur district, 35 passengers had a close shave after their bus got stranded on a bridge submerged by a flooded stream. Police personnel used big ropes to rescue the stranded passengers, including children. In the Bhandara district, 15 people got stranded at a temple in the middle of the swollen Wainganga river. They had gone to the temple to offer prayers on the occasion of Guru Purnima.

As many as 200 families were shifted to safety in Nanded district as the Painganga river started overflowing owing to continuous heavy downpours for the last three days. Road links to 26 villages in the district have been cut off due to floods, officials said.

In Gadchiroli too, 2,000 people from 19 villages were shifted to safety as the Godavari, Kaleshwaram and Indravati rivers are at spate while the Wainganga, Pranhita and Wardha rivers are flowing near the warning level in the district.

The Maharashtra capital was lashed by incessant showers leading to flooding in many low-lying areas and traffic snarls. According to IMD, 20 locations in Mumbai received nearly 40 mm showers in six hours till 9.30 am on Wednesday.

Local trains, considered the lifeline of Mumbai, were largely unaffected on the Central Railway and Western Railway routes. The suburban services on the Harbour Line were running slow, according to railway officials.

As rains continue to wreak havoc in different parts of Karnataka, Chief Minister Basavaraj Bommai said 32 people have lost their lives so far and Rs 500 crore will be released immediately to restore the basic infrastructure that got damaged.

Rains have continued in several parts of Malnad and coastal Karnataka causing a flood-like situation, also there have been several incidents of landslide and sea erosion.

Rivers in the region have swelled, several dams have reached the brim and there is severe waterlogging in agriculture fields and low-lying areas causing damage to crops and properties. Similar is the situation in adjoining districts of Shivamogga, Chikkamagaluru and Hassan.

The increase in water level in rivers and dams are a cause of worry in a few northern districts of Belagavi, Vijayanagara and Yadgir. Water is being let out through 15 crest gates at Yadgir's Basava Sagara dam into the Krishna river. The reservoir is receiving an inflow of about one lakh cusecs. People along the riverside have been asked to move to safer areas.

With the Tungabhadra dam almost reaching its capacity and increasing water flow in the river, there are threats of some of the monuments at the heritage site of Hampi like Purandara Mantapa getting inundated.

In Odisha, very heavy rains battered many parts of the coastal state, causing a landslide in the Gajapati district that damaged at least 10 houses while major roads in Malkangiri and Kalahandi districts were damaged. The IMD has forecast heavy to very rains in nine southern Odisha districts in the next two days.

The heavy rainfall has thrown life out of gear in the Motu area of Malkangiri district bordering Andhra Pradesh and Chhattisgarh. Road communication between Malkangiri to Telangana, Andhra Pradesh and Chhattisgarh has been disrupted as rainwater up to a height of six to eight feet was flowing on the road, an official said. The rainwater was also seen flowing over major roads in the Kalahandi district.