Ramlal sent back to RSS; 3 in race for key BJP post

The talk of Ramlal being shifted out of the organisation to a newer role in the Sangh was being speculated upon for several months. 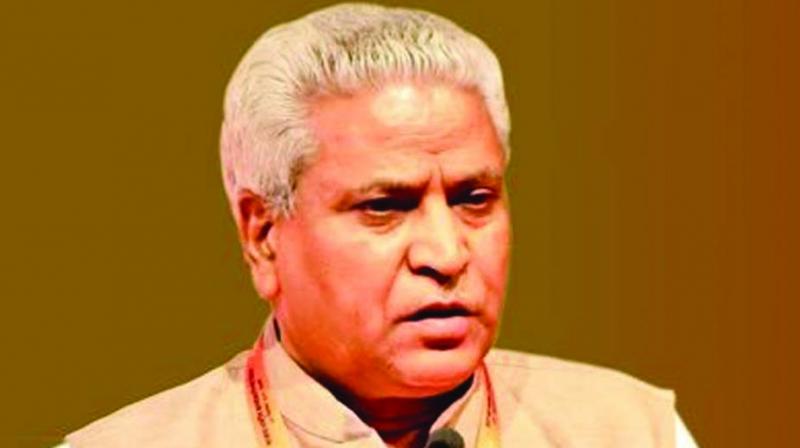 New Delhi: In a significant restructuring of the partnership between the BJP and its ideological parent, the RSS, the national general secretary (organisation) Ramlal has been moved back to the Sangh as its Akhil Bharatiya Sah Sampark Pramukh.

Ramlal, who was the national general secretary (organisation) of the BJP since 2005, will now be part of RSS and conduct the Sangh’s ambitious outreach programme, sources said. It is understood that Ramlal’s removal comes as the top BJP leadership wants someone in the position who is “more loyal” to the present dispensation. Party sources stated that another thing that went against Ramlal was that “he had a mind of his own”.

The talk of Ramlal being shifted out of the organisation to a newer role in the Sangh was being speculated upon for several months. However, given the fact that he had looked after organisation for over a decade, the BJP top brass decided to let him continue in the wake of Lok Sabha elections. “It was felt that change of guard at that time could upset the power equations within the party and this would impact the structure at the state level as well. The change was waiting to happen,” a senior BJP leader said.

While all three have been associated with the organisation for the past several decades, the final call is expected to be made by the BJP, in consultation with the RSS, on Ramlal’s replacement soon, sources said.

The position of the BJP’s national general secretary organisation is considered significant as the incumbent is responsible for better coordination between the party and the RSS. The person holding this post is loaned from the RSS for effective supervision of organisational tasks and can be repatriated to Sangh.

The change in guard has come at a time when the BJP is looking at Assembly polls in three states later this year — Maharasthra, Haryana and Jharkhand — where it hopes to retain power.