The officials said that the restrictions were “preventive in nature” and imposed to “maintain law and order.” 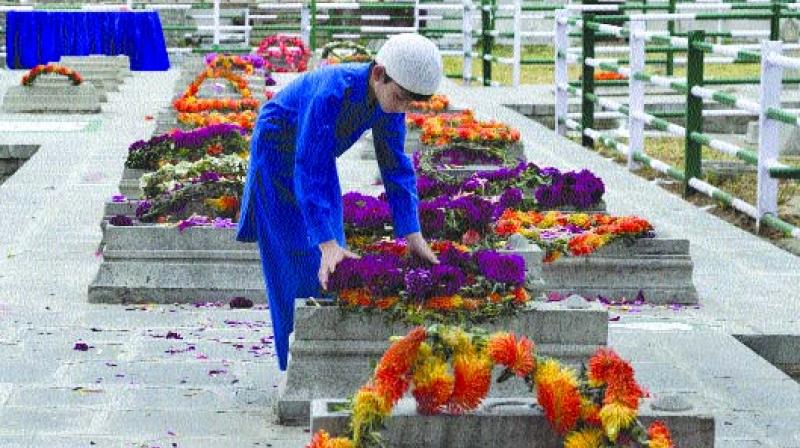 A Kashmiri boy lays a wreath on a grave at Martyr’s Graveyard in Srinagar. (Photo: PTI)

Srinagar: On the second consecutive day, Saturday, the J&K police and Central armed forces enforced curfew-like restrictions in several parts of Srinagar considered as “sensitive” by the authorities to hold back pro-aazadi rally planned by separatists at “Mazar-e-Shohda” or martyrs’ cemetery here to mark the 88th anniversary of slaying of 22 local Muslims by autocratic Dogra Maharaja’s army.

The officials said that the restrictions were “preventive in nature” and imposed to “maintain law and order.” Earlier, the authorities had placed key separatist leaders under house arrest to prevent them from arranging or attending the rally.

Chief Muslim cleric and separatist leader Mirwaiz Umar Farooq had announced to lead a procession from Srinagar’s Grand Mosque to the martyrs’ cemetery in City’s Khawaja Bazaar area to pay homage to the martyrs of July 13, 1931.

However, the leaders and representatives of mainstream political parties, including National Conference and Peoples’ Democratic Party were allowed to visit the martyrs’ cemetery to pay floral tributes and offer fateha prayers. J&K governor’s advisor Khursheed Ahmed Ganai and divisional commissioner Baseer Ahmed Khan represented the state government at an official function held beside the cemetery during which a contingent of the local police performed guard of honour parade.

Elsewhere in the Valley, marketplaces remained shut and only skeleton transport services plied on the roads as vast majority of the people obeyed a call for shutdown issued by an alliance of key separatist leaders called ‘Joint Resistance Leadership (JRL). The authorities suspended rail services across the Valley and also reduced the mobile internet speed to 2G “as a precautionary measure to maintain law and order”.

The officials said that the travel by Amarnath pilgrims to the 3,888 feet high Amarnath cave-shrine in Kashmir Himalayas from winter capital Jammu was suspended for the day “as a precautionary measure” in view of the separatists’ strike call.  However, 16, 916 pilgrims, who reached Amarnath from the base-camps of Baltal and Pahalgam in the Valley paid obeisance at the cave-shrine. With these as many as 173,978 devotees have had the darshan of the Shivling at Amarnath during the past 13 days.

On July 13, 1931, as many as 22 Kashmiris were killed in firing by the Maharaja’s army outside Srinagar’s Central prison, where an in-camera trial of famed Abdul Qadeer Khan, a non-local chef with a British traveller, was being held.

Khan had been charged with sedition and instigating people for violence after he made fiery speeches against the Maharaja’s “oppressive” rule at a Friday congregation and while pointing towards his palace, asked people to raze it “brick by brick.”

However, BJP and like-minded parties having strong base in Jammu, the native place of despotic Dogra Maharajas, consider their rule in undivided Jammu and Kashmir as a ‘golden period’ and also maintain that Maharaja Hari Singh was a genuine ruler of the state.

Panun Kashmir, Kashmir Vahini and some other political groups of displaced Kashmiri Pandits, on the other hand, allege that July 13, 1931 also marks the beginning of “persecution” of the minority Hindus in the Valley by Muslim majority. As in the past, these outfits on Saturday held small rallies in winter capital Jammu and elsewhere to mark the occasion in their own fashion.