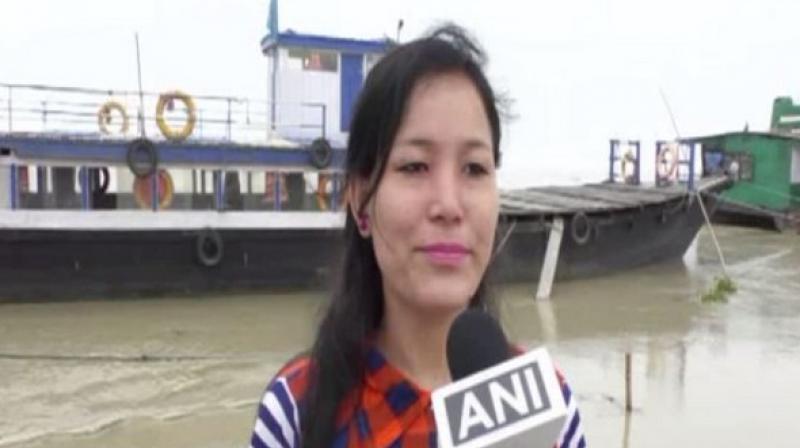 "Around 100 houses have been affected. We are unable to enter into our houses as the water level has reached above our shoulders. We have tied our cattle a little far from here. There also the situation is same," a local told ANI. (Photo: ANI)

Jorhat: Following incessant rainfall and rise in the water level of river Brahmaputra, ferry services have been suspended in Jorhat's Majuli Island. Incessant downpour in the state has led to a flood-like situation affecting thousands of residents.

The Brahmaputra River at Nimati Ghat in Jorhat and Dhansiri, Jia Bharali, Puthimari and Beki rivers are currently flowing above the danger level.

According to villagers, ferry services between Majuli and Jorhat have been cut off for over a week following the rise in water levels.

People have been struggling in moving from one place to another and they are also unable to visit markets to buy household products and other materials.

Over 100 houses have been almost submerged and cattle are unable to come out from their shelters.

"Around 100 houses have been affected. We are unable to enter into our houses as the water level has reached above our shoulders. We have tied our cattle a little far from here. There also the situation is same," a local told ANI.

"It is been over a week that ferry service was stalled in this area. This is due to a rise in water level. Now, the government has started providing us food and medicines. Relief and rescue operations are also underway," another local said.

Troops of Indian Army along with SDRF and Civil Administration are conducting rescue operations in the area and 150 villagers who were stranded in Balipur Char of Baksa district in the state have been evacuated.

At least six people have lost their lives in Assam till July 12 and as many as 21 districts of the state have been affected due to the deluge.