While Ika Ravi made online donation of Rs 10 Cr, the other Srinivas Guttikonda personally handed over Rs 3.5 Cr through Demand Draft. 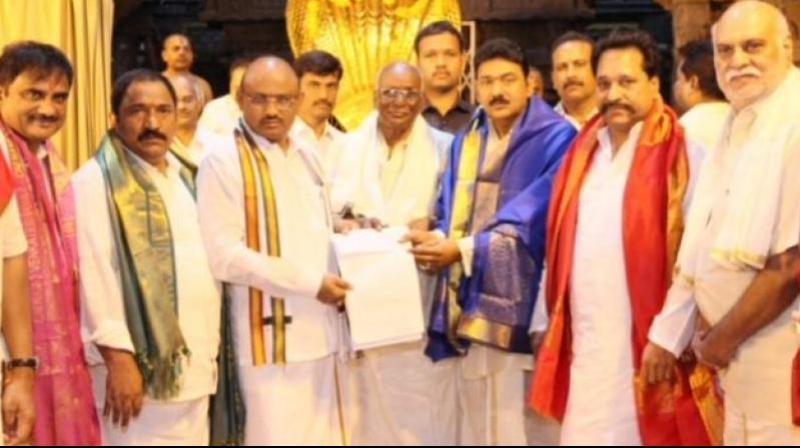 The offerings were made in the presence of TTD Chairman Putta Sudhakara Yadav, Andhra Pradesh Industries Minister N Amaranatha Reddy and other officials at the hill temple. (Photo: tirumala.org)

Tirupati: Two US-based entrepreneurs on Saturday donated Rs 13.5 crore to the famous hill shrine of Lord Venkateswara at nearby Tirumala.

The NRI devotees, originally hailing from Andhra Pradesh, donated the huge cash offerings as a fulfilment of their vow, a temple official said.

While one of them, Ika Ravi had made an online donation of Rs 10 crore to the e-Hundi of Lord Venkateswara from his US account, the other Srinivas Guttikonda personally handed over the donation of Rs 3.5 crore through a Demand Draft to the temple, Public Relations Officer of Tirumala Tirupati Devasthanams (TTD) T Ravi told news agency PTI.

The offerings were made in the presence of TTD Chairman Putta Sudhakara Yadav, Andhra Pradesh Industries Minister N Amaranatha Reddy and other officials at the hill temple Saturday morning, he said.

Guttikonda also requested the TTD to utilise his offering for about half-a-dozen TTD-run public welfare trusts, including pilgrim Free Meals, a hospital and a children's orphanage in Tirupati, the official added.