Both Dutee and Rachita are from Odisha. Rachita has settled down in Mumbai after marrying a fellow athlete from Maharashtra. 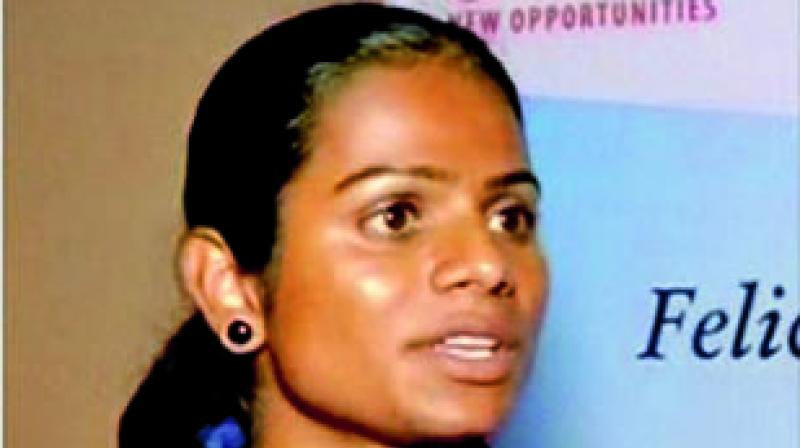 After being dubbed as a “different” gender by Mistry, Dutee on Thursday said she would file a defamation suit against the former Indian Olympian.

“I have all respect Rachita Panda Mistry, who is also from my state Odisha. However, she is now trying to destroy my career by dubbing me as transgender. I’m a complete woman. I have been seriously hurt by her remarks and I’m planning to sue her,” Dutee told reporters. The athlete, who won bronze in 100-metre sprint in the recently-held Asian Athletics Championships here, said she was currently passing under serious trauma after Rachita dubbed her as transgender.

“After she dubbed me as transgender, my own people are distancing themselves from me. People are now treating me differently as if I’m not a human being. This has put me under serious traumatic conditions,” Dutee said, adding, Rachita was jealous of her as “I broke her national record in 100-metre run.”

Rachita, who appeared defiant on her remark, told a local television channel over telephone that she stood by what she had said about Dutee and was prepared for defamation case.

“I’m not against Dutee Chand running on the track and earning medals for the country. Nor do I want to see that her career ends abruptly because of the gender controversy surrounding her. There are many transgender athletes in the world who want to run. Dutee can compete in that category,” she said.

Both Dutee and Rachita are from Odisha. Rachita has settled down in Mumbai after marrying a fellow athlete from Maharashtra.

Undeterred by such adversities, the 21-year-old ace Indian sprinter said she would focus on her game and try to win medals for the country in all international level competitions.

Notably, Dutee was disqualified in 2014 by the Athletics Federation of India (AFI) as per IAAF’s hyperandrogenism policy after tests revealed that her body produced natural levels of testosterone above permissible range.

The Odia girl challenged the regulations and the decision of the AFI to ban her in September 2014.

In its interim order in July 2015, the CAS panel suspended the IAAF Regulation governing eligibility of females with hyperandrogenism to compete in women’s competition for a maximum period of two years in order to give the IAAF the opportunity to provide the CAS with scientific evidence about the quantitative relationship between enhanced testosterone levels and improved athletic performance in hyperandrogenic athletes.