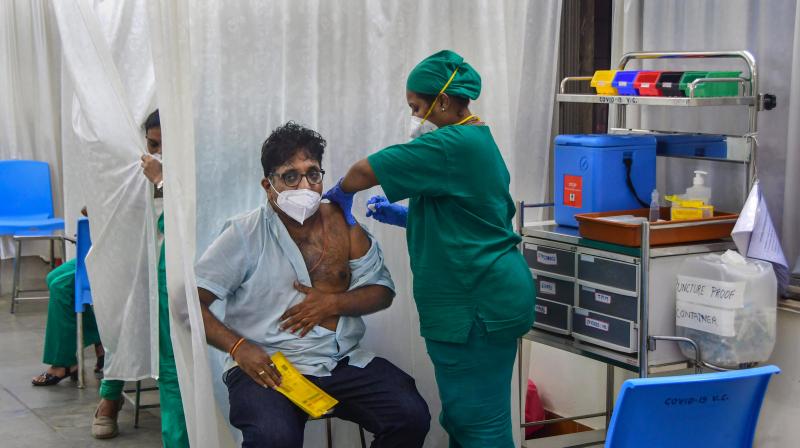 HYDERABAD: A study conducted by the Asian Institute of Gastroenterology (AIG) during the second wave of Covid-19 pandemic found that higher antibody response was observed in healthcare workers who were given one dose of Covishield. The study was published in the International Journal of Infectious Diseases.

To understand the immune response of the vaccine and creation of antibodies, the study was conducted in 280 healthcare workers who were previously infected with Covid-19. Of them, 131 suffered from mild to moderate disease and 50 required hospitalisation. All the 131 were seropositive and 149 were seronegative prior to the first dose of vaccine. They got the jab between January 16 and February 5, 2021, and the study found that they were protected during the second wave.

Comparing the antibodies in both the groups, the study found that there was a significantly higher response in antibodies in those who were already infected. This means that the immune memory in the human body to protect from the virus is high in recovered patients.

The study concluded that the single dose of vaccine does offer protection and creates the immune memory required to fight the virus. Among those who were not infected, there is generation of antibodies but it is comparatively lesser when compared to those who were infected.

Commenting on the impact that this study can have on the overall vaccine administration strategy, Dr D. Nageshwar Reddy, chairman, AIG Hospitals and one of the co-authors in the study, said, “The results show that people who got infected with Covid-19 need not take two doses of vaccine yet as a single dose can develop robust antibody and memory cell response. This will significantly help at a time when there’s a shortage of vaccines in the country and more people can be covered using the saved doses.”

Dr Reddy says that once we have a large number of people vaccinated, we will be achieving herd immunity and at that time a second dose can be administered. He insists that at this point, the vaccine strategy must be directed at the distribution and inclusion of maximum people for a single dose.