She said that the government was giving full co-operation and taking all necessary actions. 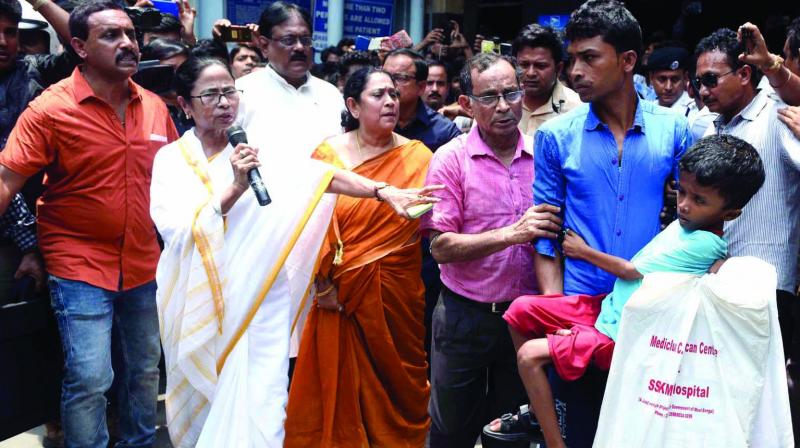 New Delhi: Highlighting the plight of patients at hospitals due to the ongoing strike by junior doctors, West Bengal chief minister Mamata Banerjee on Thursday alleged that some political parties were “provoking” the matter.

In a Facebook post, which came after the striking doctors defied Ms Banerjee’s 2 pm-deadline to join work, she described the injuries sustained by the two junior doctors at NRS Medical College and Hospital as “unfortunate”.

The doctors have been agitating since Tuesday after their two colleagues were attacked allegedly by family of a patient who died during treatment.

Five persons have been arrested in connection with the incident, Ms Banerjee said, adding that an inquiry has also been ordered to look into complaint of negligence during treatment, resulting in the death of the patient. “Cancer patients, kidney patients, accident victims, even children coming from distant places are suffering for not getting treatment,” she said.

“Five persons have been arrested and their bail prayers were rejected by the court. Our government has taken full care of the injured doctor. We pray that he rec-overs quickly. As per information received, he is stable and improving,” she added.

She said that the government was giving full co-operation and taking all necessary actions. “But, in spite of that, provocations are coming from other political parties, which no one should fall trapped into.”

Ms Banerjee said when she visited SSKM Hosp-ital she saw gatherings of “outsiders of different parties” shouting slogans in hospital silence zone and stopping emergency services. “Patient parties are crying and outdoor services are closed. I sent some patients to private hospitals for immediate treatment. I am grateful to senior doctors and professors who are offering full services to the people. My humble regards to them for their cooperation. Some misinformation/disinformation being spread on social media,” she said.