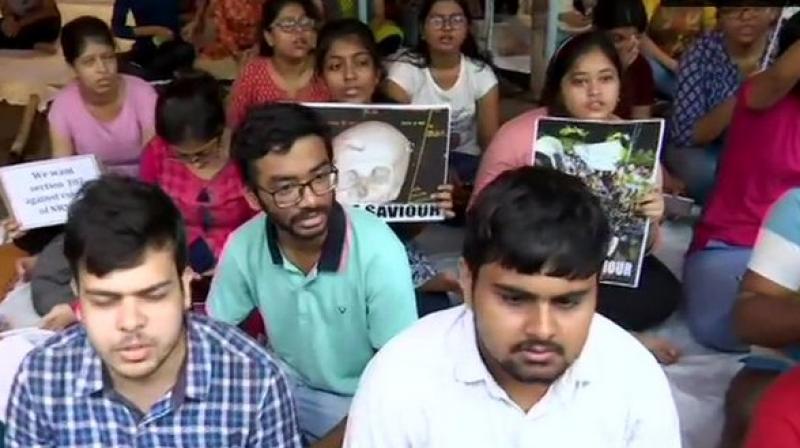 Junior doctors in Kolkata have been on strike after two of their colleagues were attacked and seriously injured over an issue of alleged negligence at the NRS Medical College and Hospital in Kolkata on Tuesday. (Photo: File)

New Delhi: In the light of the recent assault on doctors in Kolkata, several doctors across nation have joined the nationwide protest on Friday to demand protection to doctors.

The Indian Medical Association has now called for a nationwide strike protesting the attack on a doctor in Kolkata. The proposed strike is to happen on Monday, June 17.

Thousands of patients in the national capital were hit hard after the doctors at AIIMS Delhi halted health services. Maharashtra Association of Resident Doctors (MARD) also joined the protest in support of the counterparts in Kolkata.

Members of Indian Medical Association, Trivandrum also held protest over violence against doctors in West Bengal. Doctors from various medical institutions in Telangana joined the nationwide protest demanding justice and protection to them in the wake of the recent assault on doctors in Kolkata.

Condemning the violence against doctors in Kolkata, Union Health Minister Harsh Vardhan urged patients and their attendants to exercise restraint. Harsh Vardhan said he would take up the matter of doctors' security with all chief ministers and asked the doctors to ensure that essential services to the people are not disrupted.

Dr Harsh Vardhan appealed to West Bengal Chief Minister to not make this an issue of prestige. "Mamata Banerjee gave the doctors an ultimatum, as a result they got angry and went on strike. Today, I will write to Mamata Banerjee ji and will also try to speak to her on this issue," said Health minister.

Junior doctors in Kolkata have been on strike after two of their colleagues were attacked and seriously injured over an issue of alleged negligence at the NRS Medical College and Hospital in Kolkata on Tuesday.

"My sister was supposed to go for eye surgery. She has a tumour in one of her eyes. We reached the hospital as per the given time but the room was locked. The staff at the hospital said that the doctors are on strike. I don't know what when this strike would end," said Mohammed Arif, a resident of Delhi.

Santosh Kumar also narrated his ordeal and said due to strike they are forced to take treatment for his mother from a private hospital and being a poor he cannot afford it.

"I am poor and have come from a very far place. Doctors here are on strike. My mother is having a kidney problem. They told me to take her to a private hospital for the dialysis. I am poor and cannot afford it," Kumar said.

Speaking to ANI, Prashant Chaudhary, President of MARD at Scion hospital, said: "The incident was clearly a targeted assault. This has now become a law and order issue. We express solidarity to the seriously injured doctors. We will abstain from providing our routine services from 8 am to 5 pm today, but at the same time we will make sure to inform the administration so that Outpatient Department treatment (OPD), Operation Theatres (OT) and wards keep running."

Delhi Medical Association (DMA) and Resident Doctors Association of the All India Institute of Medical Sciences (AIIMS) have also called for a strike today.

"Even though the security has been provided by the Maharashtra government at most medical colleges, we demanded them to increase the security cover. Our other demand is regularization of working hours of the resident doctors," Chaudhary said.

He further said that he wrote a letter to the government regarding the issue, but the stand in their reply was not "empathising".

This comes nearly five days after a junior doctor at Nil Ratan Sarkar (NRS) Medical College and Hospital in Kolkata was allegedly attacked by the relative of a patient who died on June 10. 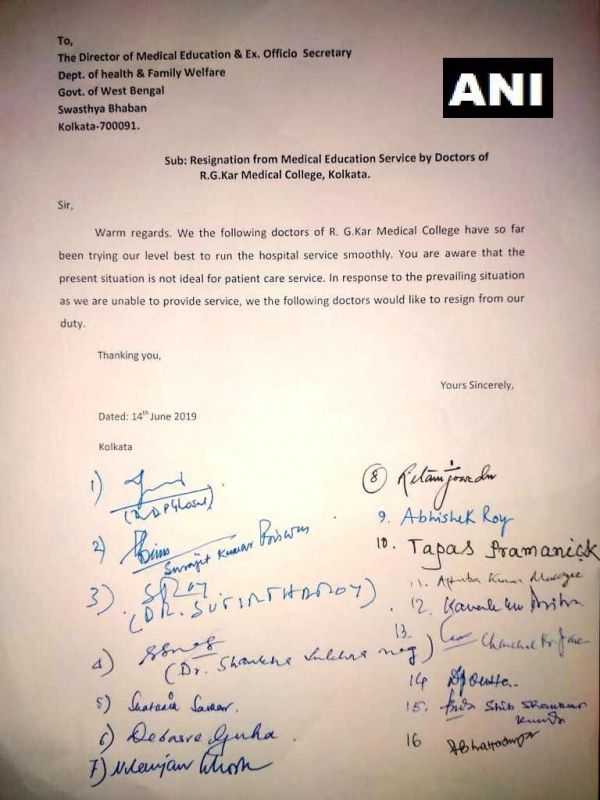 16 doctors of the RG Kar Medical College & Hospital, Kolkata submit their resignation stating, "In response to prevailing situation as we are unable to provide service, we would like to resign from our duty."