Massive fire-fighting to control the blaze and rescue operation by the Indian Coast Guard is underway. 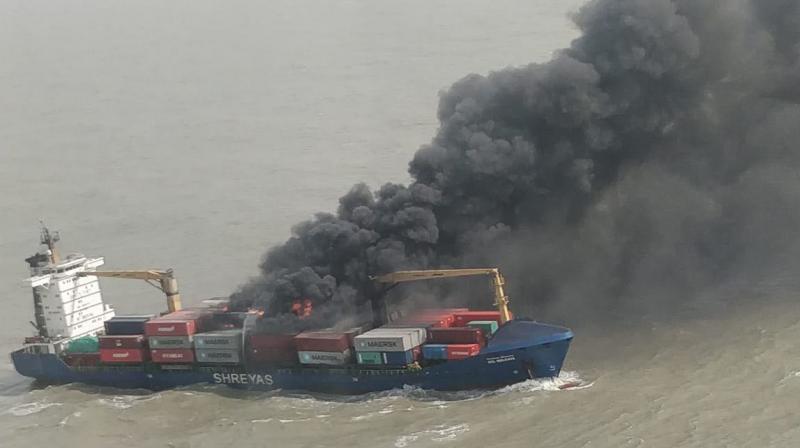 The rough sea wind is hampering the rescue operation as the fire is yet to be brought under control. (Photo: Asian Age)

Kolkata: A merchant ship -- MV SSL KOLKATA -- an Indian flag container vessel, caught fire in the Bay of Bengal off the coast in the wee hours of Thursday.

All the 22 crew members were rescued by the Indian Coast Guard which launched a massive fire-fighting and rescue operation. But the fire is yet to be brought under control due to the rough sea wind.

ICG (North East Regional Headquarters) Chief Staff Officer (Aviation) and spokesperson Pradeep Sundriyal informed that the fire was reported on board the ship around 55 nautical miles off Sands Head at 12.05 am on June 14.

"On receipt of the message an ICG ship immediately sailed with despatch from Haldia. Due to very rough sea and strong winds and inclement weather, the fire spread very fast like wildfire," he said.

For efficient rescue operations, the Indian Navy's air assets from Vizag had to be pressed into action. The Indian Coast Guard and the Navy worked in tandem to control the fire and rescue all crew members.

A Sea king 42C Helicopter and one Dornier aircraft were sent from Vizag to assist in search and rescue, according to sources.

The Sea king copter is especially useful in situations wherein surface vessels cannot approach closer to the distressed vessel for reasons of own safety.

The Dornier is used for sighting the distressed vessel as well as any liferafts that may have left the mother ship, sources revealed.

Now with the rescue operation officially over, the Sea King helicopter and the Dornier aircraft have been sent back to Vizag.

Sundriyal added, "ICG ship Rajkiran from Haldia and ICG aircraft Dornier arrived in the area at around 8 am. About 70 per cent of the vessel was on fire and the decision to abandon the vessel was taken."