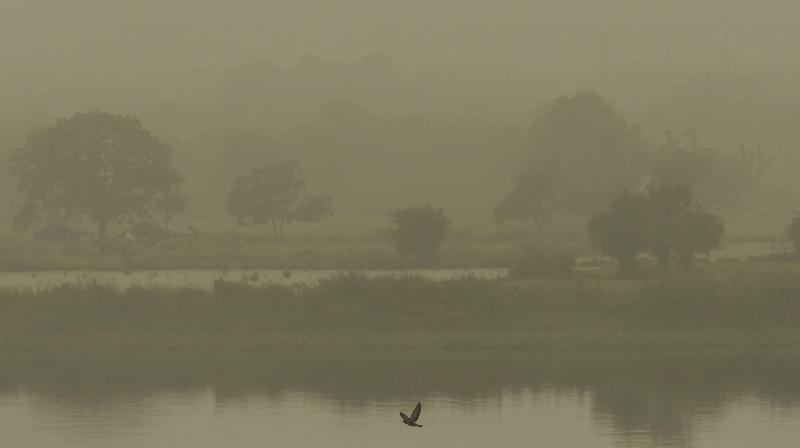 The Environment Ministry has said the dusty conditions are likely to prevail for the next three days. (Photo: PTI)

New Delhi: The air quality in Delhi remained beyond the "severe" level for the third day on Thursday, as authorities warned the dust conditions are likely to prevail for another 3-4 days and advised people to avoid staying outdoors for long hours.

The air quality deteriorated because of dust storms in western India, particularly Rajasthan, which increased coarser particles in the air, the Central Pollution Control Board (CPCB) said.

The PM10 level (presence of particles with diameter less than 10 mm) was beyond severe at 796 in Delhi-NCR and 830 in Delhi particularly, leading to hazy conditions. According to the CPCB, the air quality index (AQI) - a measurement of the concentration of toxic particulate matter in the air - at several places in Delhi remained beyond the 500-mark, with east Delhi's Anand Vihar area recording a PM10 level of 929 and PM2.5 level of 301 Thursday morning.

The wind blowing in the region has contributed to the spread of dust particles. According to the Met department, wind speed reaching up to 35 kmph is predicted for Thursday in Delhi. The dust-laden winds have created a haze in Delhi-NCR since Wednesday.

The Environment Ministry has said the dusty conditions are likely to prevail for the next three days. It has alerted construction agencies, municipal corporations and Delhi Pollution Control Committee to ensure water sprinkling.

The CPCB said pollution this summer is very different from 2017. In November, both PM2.5 and PM10 spiked in the Delhi-NCR region which posed a serious health hazard to residents.

However, the increase in pollution levels now is mainly due to a drastic increase in coarse particles in the air. This time the PM2.5, ultra-fine particles that may reach lungs and affect its functioning, is not as high as that of November 2017.

A Sudhakar, CPCB member-secretary, warned residents that the pollution level is expected to remain like this for 3-4 days and people are requested to avoid staying outdoors for more than 3 to 4 hours.

"There could be discomfort or breathing difficulties due to the pollution," Sudhakar said.

"We have also called a meeting of construction companies and if the beyond severe condition persist we would stop the construction activities," he added.

At an urgent meeting on Wednesday, the CPCB directed agencies concerned to contain local dust sources.

The Environment Ministry too has requested the Delhi chief secretary to issue instructions to the agencies concerned.