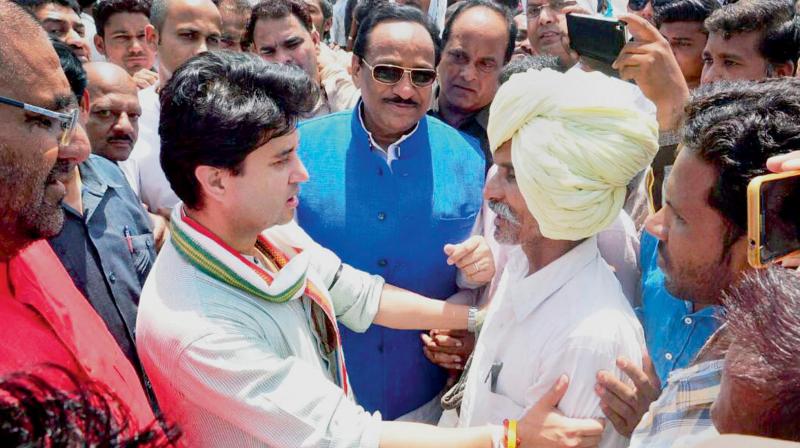 Bhopal: Two days after chief minister Shivraj Singh Chouhan ended his “indefinite fast”, saying peace has returned to Madhya Pradesh, high drama ensued on Tuesday as Opposition leaders tried to make their way to Mandsaur, the epicentre of the farmers’ stir, while the state authorities remained busy arresting and releasing them.

They were all on their way to Mandsaur to meet the families of farmers killing in the June 6 police firing.

They were arrested under Section 151 CrPC (arrest to prevent the commission of cognisable offences) as the state police had imposed Section 144 in the region, which prohibits the assembly of more than four people. They were later released on bail.

Taking strong exception to his arrest, Mr Scindia said: “If the chief minister can visit (Mandsaur on Wednesday), why couldn't I?” Chief minister Shivraj Singh Chouhan is due to visit Mandsaur today.

Mr Scindia announced that he will sit on a 72-hour-long “satyagraha” starting today, to protest against the MP government’s “anti-farmer policies”. The political wrangling came on a day when three farmer suicides, allegedly due to debt burden, were reported in Madhya Pradesh.

The farmers have been identified as Kriparam Diggodi of Hosangabad district, Hari Singh Jatav of Vidisha district, and Dulchand Keer of Sehore district, hometown of the state chief minister.

While Dulchand and Hari died by consuming poison, Kriparam was found hanging by a tree on the outskirt of his village, Bhairpur. The local police said the reason for their deaths was yet to be ascertained.

Responding to questions about farmers’ suicides, state home minister Bhupendra Singh said: “A total of five farmers committed suicide in MP in the last one year due to debt burden. Some farmers also committed suicide due to personal reasons.”

Let’s see who stops if someone plans to go alone?),” he said. Madhya Pradesh farmers have been protesting since June 1, demanding loan waiver and better prices for their produce. The situation spiralled out of control as agitating protesters looted and set ablaze properties in several districts. In the June 6 police firing, five farmers were shot dead. One succumbed to his injuries later.

In the wake of protests, the chief minister observed an indefinite fast to calm down the rising tempers. He ended his fast a day later, on Sunday, claiming that peace has returned to the state.

After his release, Mr Patel, Gujarat’s Patidar quota leader, said: “I am not a terrorist. I have not come from Lahore. I am an Indian citizen and have the right to go anywhere in the country... I am only a social activist, not a politician. I am fighting for just causes of people. I wonder why I was barred from visiting Mandsaur to meet the family members of slain farmers.” “The June 6 police firing incident has sparked anger in farmers across the country”, he added, before being packed off by police to the Rajasthan border. Meanwhile, the state government has cleared the way for the family of Kanhaiya Lal Patidar, one of the slain farmers, to get compensation of Rs 1 crore by dismissing charges of drug trafficking levelled against him. Refuting police charges that the slain farmer had four cases of drug trafficked registered in various police stations in the state, the state home minister said no such charges could be established against him.