The state government had on Tuesday sanctioned a financial aid of Rs 1 crore each to the families of six farmers killed. 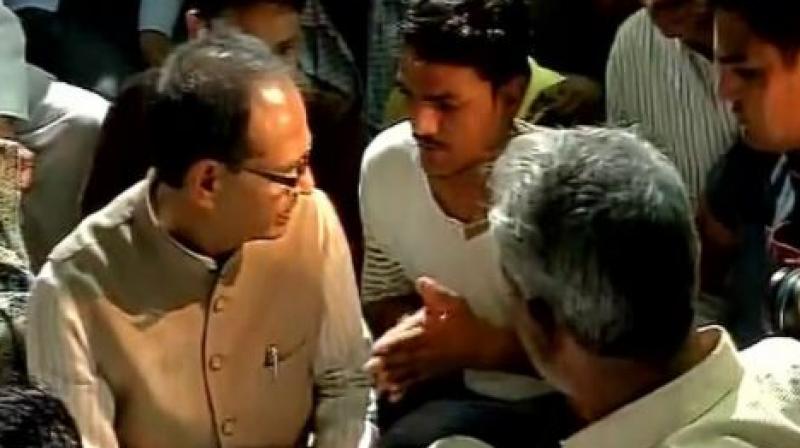 Mandsaur (MP): Madhya Pradesh Chief Minister Shivraj Singh Chouhan on Wenesday visited Mandsaur, where five farmers were allegedly killed in police firing during a protest, and handed over Rs 1 crore each as aid to the kin of the deceased.

Chouhan, along with wife Sadhna, reached Mandsaur on a special plane and first went to Badwan village to meet the kin of Ghanshyam Dhakad, who was killed in police firing.

The state government had on Tuesday sanctioned a financial aid of Rs 1 crore each to the families of six farmers killed during a violent protest staged by them at Mandsaur.

Five of them were allegedly killed in police firing, while another farmer, who was allegedly beaten up by the police, succumbed to his injuries later.

The aid was sanctioned from the chief minister's discretionary fund. Chouhan assured the family members that strict action will be taken against those guilty of killing the farmers.

He later visited Lodh and consoled the family members of Satyanarayan, another deceased farmer.

The chief minister then went to Nayakheda in neighbouring Neemuch district to meet the family of Chainram Patidar.

On the demand of Chainram's father Ganpat, he announced a tarred road from Kuchlod to Nayakheda, a community centre in the village and a memorial for the deceased farmer.

Chouhan handed over the documents related to the compensation to the kin of the farmers. The compensation amount was directly transferred to their bank accounts.

The BJP leader is also slated to visit Piplyamandi, Barkheda Panth, Budha and Chillod Piplia villages to offer condolences to the kin of the other farmers killed in the recent violence in the state.

Meanwhile, Congress heavyweight Jyotiraditya Scindia, who was prevented from going to Mandsaur yesterday, is slated to sit on a 'satyagraha' at the Dusserah maidan in Bhopal, the state capital, to protest the killing of farmers.

Chouhan, who came under a severe attack from the opposition following the agrarian unrest, had called off his indefinite hunger strike on Sunday, 28 hours after he had
launched it, claiming that peace had been restored at Mandsaur.

Though the protest has died down, five farmers ended their lives in the state in the last one week.

On June 6, five farmers were killed as their agitation turned violent at Mandsaur. The farmers' demands included a loan waiver and remunerative prices for their produce.

Besides, a 26-year-old farmer had died in Badwan village of the district subsequently. The locals had alleged that he was beaten up by the police.