Two parties — All India Gorkha League (AIGL) and Jan Andolan Party (JAP) — did not attend the meeting, but backed the call for a separate state. 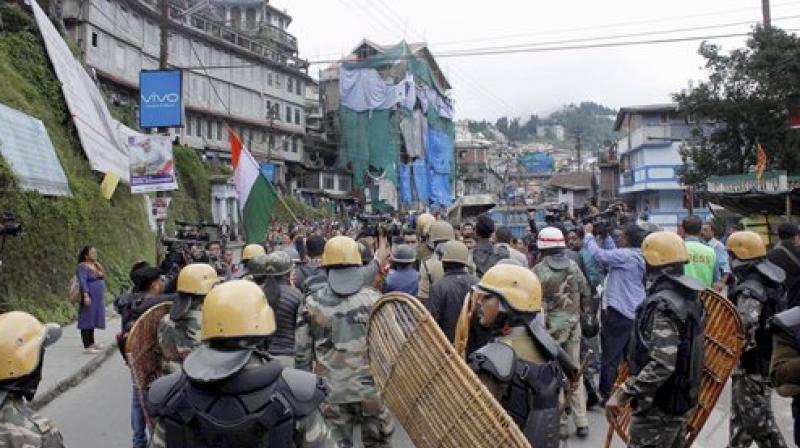 New Delhi/Kolkata: The Centre on Tuesday rushed 600 more paramilitary personnel, including 200 women, to tackle the increasing violence in the Darjeeling hills, and sought a detailed report from the West Bengal government on the situation there. These forces are in addition to the 400-strong paramilitary contingent already stationed in West Bengal which had been rushed to Darjeeling.

Two parties — All India Gorkha League (AIGL) and Jan Andolan Party (JAP) — did not attend the meeting, but backed the call for a separate state. “We unanimously decided to fight for Gorkhaland,” GJM general secretary Roshan Giri told reporters after the meeting.

Political experts said this was a setback and a direct challenge to Trinamul Congress supremo and chief minister Mamata Banerjee, who had made it clear that the Hills could not be divided.

In New Delhi, the Centre also conveyed to the state government that it was willing to provide all support to help normalise the situation and more reinforcements could be rushed to the state if required. “We are in close touch with state government officials and monitoring the situation on a regular basis. Whatever assistance the state needs we are willing to provide and we hope things will improve in the next few days. If the state administration needs help to take out stranded tourists, even that can be organised,” a home ministry official said.

The situation in the Hills was no better on the second day of the indefinite strike called by the GJM as the agitation spread to adjacent areas of Darjeeling. The tea gardens in the Hills also went into protest mode, with the protesters holding dharnas in some areas.

In the morning, protesters held a rally from Chowk Bazar and entered the office of the district magistrate after travelling through different parts of the Hills. As the police team led by SP Akhilesh Chaturvedi urged them to go back, GJM supporters began to throw stones and bricks at the police. The police then resorted to a lathicharge to disperse them.