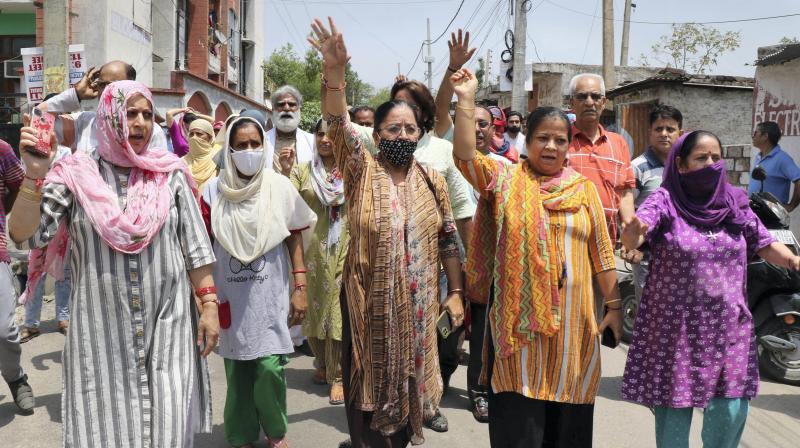 Kashmiri pandits raise slogans during their protest over the killing of Rahul Bhat, in Jammu, Friday, May 13, 2022. Bhat, a government employee, was shot at by militants inside his office and later succumbed to injuries on Thursday. (PTI Photo)

SRINAGAR: Protests and vigils across Jammu and Kashmir continued for the second day running on Friday over the targeted killing of a government employee belonging to the minority Kashmiri Pandit community. In Srinagar, the police fired teargas canisters to break a huge crowd of angry pandits who, while chanting anti-government and anti-BJP slogans, marched towards the Srinagar International Airport after their demand to meet the Lieutenant Governor Manoj Sinha was ignored.

The J&K police has set up a special investigation team (SIT) to probe the target killing of Mr Bhat. The J&K administration has, meanwhile, announced plans to provide a government job to Mr Bhat's wife in Jammu and financial assistance to the family. The government will bear the educational expenses of the daughter, an official spokesman said.

Notwithstanding the government’s aids and assurances, the All PM Package Employees Forum, an organisation of Kashmiri Pandit government employees, en-masse wrote resignation letters to the Lt Governor with copies to the Prime Minister’s Office and ministry of home affairs.

“Due to the dejection by the policies of the administration and subsequent failure of providing a sense of security to the Kashmiri Pandit minorities serving in the Valley for the last 12 years and due to threat of life, we PM Package employees and non-PM package employees have been left with no option but to give en-mass resignation which we know is the only solution to save our lives,” the letters read.

The 35-year-old Bhat was on late Thursday afternoon shot by two pistol-borne youth inside the tehsil office in the town of Chadoora in central district of Budgam where he worked as a clerk. He was rushed to Srinagar’s government-run Sri Maharaja Hari Singh Hospital where he succumbed to his injuries.

The targeted killing sparked off protests by Kashmiri Pandits at several places in Kashmir Valley and Jammu region. At places, the protesters while demanding adequate security to the members of the minority community and exemplary punishment for those involved in the recent spate of target killings and other crimes chanted anti-government and anti-BJP slogans. They alleged that the BJP government too has failed them.

The family of Mr Bhat also expressed dismay over the government’s “letting the community down”. The community members, including his family, accused the BJP-led government at the Centre of making young Kashmiri Hindus "cannon fodder" in the name of rehabilitation of the community. They also said that the gory incident has shattered their dream of returning to their hearth and homes in the Valley and resettling there permanently.

New agency PTI quoted Som Nath Bhat, a relative of the slain, as saying, “You (BJP) have formulated a plan to get young Kashmiri Pandits killed in the name of giving them jobs and rehabilitating them.”

As the emotions ran high while the last rites of Bhat were being performed at the Bantalab cremation ground, groups of displaced Kashmiri Pandits held protests against his murder and demanded adequate security for the Pandit employees and their families in the Valley. The protesters dispersed peacefully.

Senior government and police officials, along with local BJP leaders and members of civil society also visited the cremation ground.

At Sheikhapora dozens of Kashmiri Pandits, mainly government employees assembled outside the migrant colony again early on Friday morning to continue with their protests against Mr Bhat’s murder.

A few hours later, when they began marching towards the airport, the riot police came in their way and burst teargas canisters to push them back. A police official who spoke to this newspaper on the condition of anonymity alleged that “some miscreants” among the protesters hurled stones at the police, forcing the latter to use mild force to bring the situation under control.

“We had asked the government and police officials that the Lt Governor should meet us at the Sheikapora (migrant transit camp) to show his solidarity with the family and colleagues of Rahul Bhat and others grieved over his cold-blooded murder by terrorists and listen to our grievances and demands. But he failed to turn up till 11 am, our patience exhausted, so many of us began walking towards the airport,” said a Kashmiri Pandit.

Later in the day, the J&K police issued a statement saying that the protesters who had blocked the Sheikhapora-Budgam road since Thursday afternoon suddenly started moving towards the airport road. “The protesters who were adamant to block the airport road did not pay any heed and instead managed to travel about one kilometre from Sheikhapora. Given the topography of the area and huge rush at the airport road there were inputs that terrorists may take advantage of the same and may attack the protesters in order to create communal clash/tension. Therefore in view of this, while sensing the security of the protesters who had resorted to violence and neglected the pacification requests by administration and to thwart evil designs of anti-national elements, the police were constrained to finally hurl a few teargas smokes to disperse them. However, the protesters again re-assembled at Sheikhapora road and sat in protest and blocked the main road. Later all of them went back to their homes."