India   All India  14 May 2019  Video: 25-yr-old Noida woman kicked, pulled by hair by employer over salary dispute
India, All India

Police said prima facie it appears a dispute between the employee and the employer over salary. 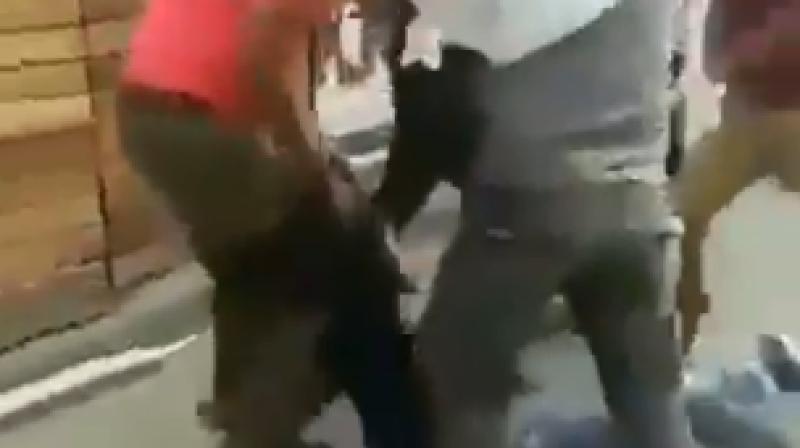 In the video, the suspects kicked the woman and pulled her by her hair. The video went viral on social media. (Photo: Screengrab)

Noida: A 25-year-old woman employee of a unisex salon in Greater Noida was allegedly beaten up by her employer and his friends over a salary dispute, reported Hindustan Times.

In the video, the suspects kicked the woman and pulled her by her hair. The video went viral on social media.

The salon owner was arrested on Monday evening, two days after the incident on Saturday.

After the incident on Saturday, the accused went to file a complaint against the woman at the Knowledge Park police station.

The woman said: “However, when I reached the police station on Saturday, they took my complaint but did not act on it seriously.”

Shocking incident from Greater Noida area where a girl, in a viral video, is seen being beaten up and assaulted by a group of men with stick. @Uppolice Incident is from Knowledge Park Police Station area. pic.twitter.com/1s9tJFsCVs

Police registered an FIR against the accused on Sunday.

According to the woman’s police complaint: “She lived in Bhangel, had joined the Venus Unisex Salon in Knowledge Park II as a makeup artist on March 16 on a monthly salary of Rs 17,000. She alleged that Waseem demanded physical relations when she asked for her salary. On Saturday evening, they called me to collect my salary. When I reached the salon, Waseem’s friend Shera tried to rape me. I put up resistance and came out of the salon. Then all the four started thrashing me.”

“I raised an alarm and people gathered around for my rescue. The four men thrashed me badly before local people rushed to my help,” she alleged in her complaint.

The woman said she informed the police. “The police team arrived late and the accused managed to escape,” she said.

Police said prima facie it appears a dispute between the employee and the employer over salary.