Sources also said Stain invited the TRS chief to take part in the meeting of the Opposition leaders in Delhi on May 21. 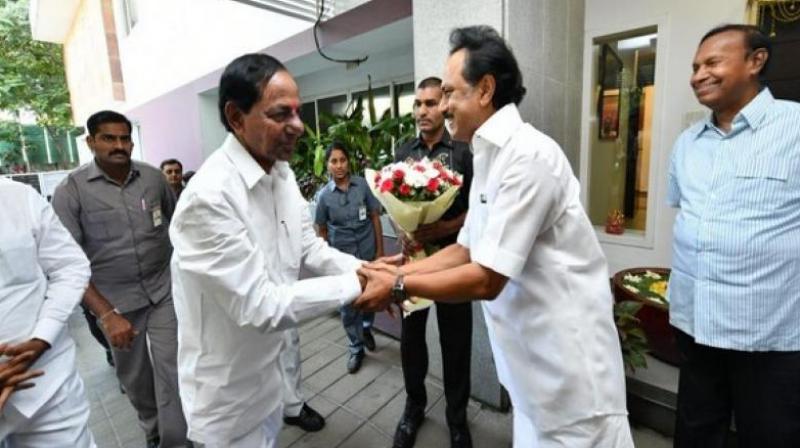 Chennai: DMK president MK Stalin on Monday turned down the federal front proposal from the Telangana Rashtra Samita chief K Chandrasekhar Rao after playing a ‘polite’ host to the persuasive skills of the Telangana CM for a little over an hour at his Alwarpet bungalow. It was unthinkable for the DMK to leave the Congress-led UPA since it was he who had proposed Rahul Gandhi as the Prime Minister of Opposition alliance, Stalin told KCR.

Sources said Stalin pointed out to KCR that the Congress is the DMK’s ally in the Lok Sabha elections as well as the by-elections to some Assembly seats. In fact, the Congress had readily conceded the DMK request that it be allowed to contest by-elections to all the 22 Assembly seats, he told KCR, to which the latter reportedly said there’s nothing wrong to discuss an alternative front, the federal front, since the Congress would not be able to win enough number of seats to be able to form the government. Stalin’s response to this was a firm ‘no’, sources said. The DMK chief reportedly informed KCR that any talk about a third front — call it any name — would dilute dangerously the Opposition efforts to combine forces to defeat the BJP and Narendra Modi. He also told his guest that in the present political scenario, the federal front did not inspire confidence it would provide stable government at the Centre, going by the past experience.

Sources also said Stain invited the TRS chief to take part in the meeting of the Opposition leaders in Delhi on May 21. Mr Rao has been speaking to various leaders on forging a Federal Front for the regional parties to come together to form the next government at the Centre.

He has not found anyone supporting his proposal — despite his calling it ‘a mission based on scientific economic model’. Perhaps there were more takers for his bête noire Chandrababu Naidu’s charge that TRS/KCR is the BJP’s B-team.

The DMK chief had turned down an earlier request from KCR seeking a meeting, conveying inability to keep away from the hectic electioneering for the Assembly by-elections happening on May 19. It turned out that the Telangana CM once again asked on Sunday for a meeting and Stalin with some reluctance agreed for a 4 pm rendezvous at his house. He also invited the DMK treasurer Durai Murugan and headquarters secretary TR Baalu to be present.

The permutations and combinations that may emerge at the  national level following results to the Lok Sabha elections on  May 23 were among the points discussed, the sources said.  While the DMK dubbed the meeting as only a “courtesy  visit,” Rao did not meet the waiting reporters.