India   All India  14 May 2019  Clashes erupt in Kashmir Valley over rape of 3-yr-old, scores hurt
India, All India

Accused being framed due to property row between 2 families: Kin. 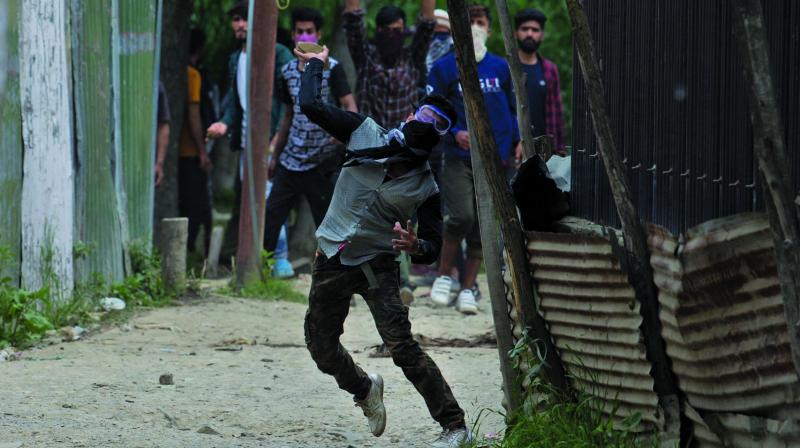 A youth throws stones at policemen during a protest on the outskirts of Srinagar on Monday. (Photo: AP)

Srinagar: Several parts of Kashmir erupted on Monday amid a partial protest shutdown and widespread outrage over alleged rape of a 3-year-old girl by her neighbour in Bandipore district of the Valley.

Scores of persons were injured in these clashes, one of them critically. Witnesses and hospital sources said that the critically injured youth, identified as Arshad Ahmed Dar, was hit by a teargas shell in his head during a clash in Chenbal area of Pattan in north-western district of Baramulla. Students of various educational institutions also held protest demonstrations in different parts of the Valley. The call for shutdown had been issued by Anjuman-e-Itehadul Muslimeen, a religio-political organisation of the Valley’s Shia community.

The family of the minor girl has alleged that she was raped by her neighbour after luring her to a nearby school in Bandipore’s Sumbal area on the evening of May 8. The relatives of the accused have, however, denied the charge and said that he has been framed due to a property dispute running between the two families of the area belonging to two different sects of Muslims.

The police said that it has arrested the accused and that a Special Investigation Team (SIT) is probing the alleged incident. The police has also called the principal of a local school for questioning after it allegedly issued a certificate declaring the accused a minor.

“As of now, we’re treating the accused as major. The certificate showing his age that was uploaded on the social media is not authentic,” Bandipora SSP Rahul Malik said. Another police officer said that the age of the accused will be determined through scientific medical investigation by a team of senior doctors.

DIG north Kashmir, Muhammad Sulieman Choudhary while talking to reporters in Sumbal assured that the investigation being carried out in the case would be foolproof and people should have faith in the police. “The case will be investigated in a professional manner. I also personally visited Sumbal and SSP Bandipora is also camping in Sumbal from past few days,” he said. He appealed the people not to indulge in violence.”

J&K’s Director General of Police, Dilbag Singh, said, “We will take the investigations to logical conclusion and people must remain calm.”

Various political, social and religious organisations of the Valley have demanded a fast-track investigation into the case and exemplary punishment for the culprit. The incident has also set off sectarian tensions in some parts of Kashmir as the victim and the accused belong to two different sects of Muslims. However, clergy and various political parties have urged the people not to see the crime through a sectarian prism. On Monday, both Shia and Sunni Muslims took part in protest demonstrations against the incident.