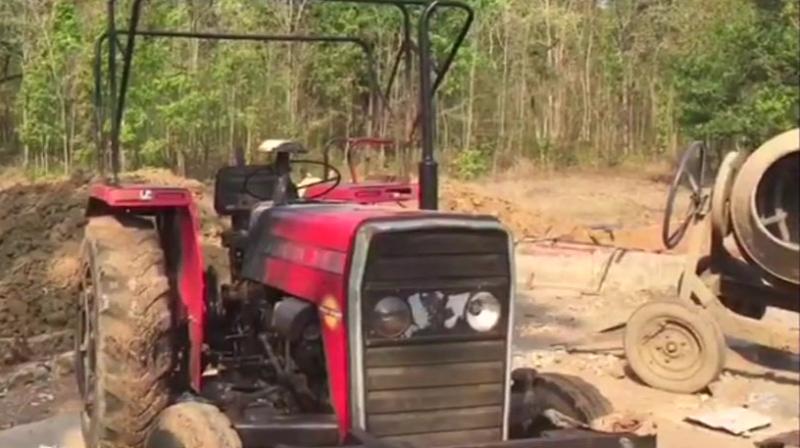 No casualty or injury was reported from either side. (Photo: @ANI/Twitter)

Raipur: An exchange of fire took place between Naxals and security forces in Chhattisgarh's Dantewada district on May 14 after the ultras disrupted train movement on the Dantewada-Kirandul railway line, police said.

No casualty or injury was reported from either side. However, Naxals torched a JCB machine and a truck engaged in laying a railway track before fleeing the spot, a police official said.

Last night, the rebels blocked the movement of a goods train on the Dantewada-Kirandul route by placing a tree on the tracks between Kamaloor and Bhansi stations, around 450 km from the state capital, Additional Superintendent of Police Gorakhnath Baghel told PTI. Acting on the information, a combined squad of the District Reserve Guard (DRG) and local police was sent to the spot for the rescue operation on the morning of May 14, he said.

While the security men were heading towards the spot, the ultras, who had laid an ambush near Pandevar forest area, triggered an IED (improvised explosive device) blast and opened indiscriminate firing on the police personnel. The patrolling team retaliated quickly forcing Naxals to escape, he said. However, before fleeing the spot, the Naxals burnt a JCB machine and a trailer truck parked near Pandevar. The machine and the truck were engaged in track- laying work as a part of the track-doubling project on the Visakhapatnam-Kirandul (Dantewada) rail route, he said.

During a search, two live IEDs were recovered from the spot, he said. The search operation was underway in the region and further details are awaited, he said.

According to a railway official, an overhead electric wire broke after a tree, chopped by Naxals to block the train traffic, fell on it between Kamaloor and Bhansi. Efforts were underway to repair the overhead wire, he said, adding that the movement of trains on the route was expected to resume by the evening of May 14.